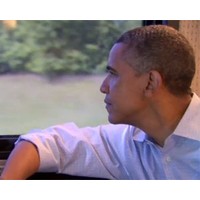 In a piece published in the current issue of Vanity Fair, contributing editor Michael Lewis tags along with President Barack Obama for a few days as the president decides whether (and how strongly) the US will commit to ousting then Libyan president Maummar Gaddafi.

The fog of war is thick, and the options discussed by Obama and his advisors are highly uncertain and complex.

Obama addresses this, telling Lewis how difficult it is to be commander-in-chief.

The picture Obama paints of his daily routine, and the way he has to think, is, to be frank, unappealing. But then again, what would we expect from the holder of the most powerful job in the world?

The whole piece is worth a read, but some of the most interesting passages concern how Obama makes decisions. Here are three take-outs:

“Nothing comes to my desk that is perfectly solvable,” Obama is quoted as saying. “Otherwise somebody else would have solved it.”

Obama says he deals in probabilities, knowing any decision he makes has a decent 30-40% chance of failing. “You have to own that and feel comfortable with the way you made the decision. You can’t be paralysed with the fact that it might not work out.”

After this, Obama needs to act like he’s totally certain about his decision, as people don’t want to see uncertainty in their leadership.

“I’m trying to pare down decisions,” he told Vanity Fair. “I don’t want to make decisions about what I’m eating or wearing. Because I have too many other decisions to make.”

Obama mentioned research that shows people make worse decisions the more decisions they have to make, which is why he tries to make as few as possible. “You need to focus your decision-making energy. You need to routinize yourself. You can’t be going through the day distracted by trivia.”

According to Obama, leaders like him can kiss work-life balance goodbye. He says he can’t afford surprises or serendipity. “You can’t wander around,” he says. “You don’t bump into a friend in a restaurant you haven’t seen for years.”

The president admits this isn’t easy. “You adapt to it, but you don’t get used to it – at least I don’t.”

When it is time to make a difficult decision, like the decision to establish a US-enforced no-fly-zone over Libya, Obama doesn’t make his position clear at the start of the meetings.

Rather, he lets everyone at the table give him their expertise. “He seems very much to want to hear from people. Even when he’s made up his mind he wants to cherry-pick the best arguments to justify what he wants to do,” one advisor told Lewis.

In the meeting Vanity Fair was privy to, Obama wasn’t satisfied with the answers being given for him. No one was answering what he thought was a key concern (would a no-fly zone over Libya achieve anything). So he started asking everyone else in the room what they thought of the situation, without asking them specifically about the no-fly zone.

“It’s the Heisenberg principle,” he said. “Me asking the question changes the answer.”