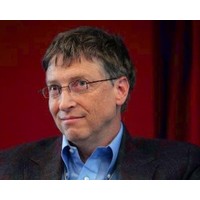 The program crowdsourced questions from the studio audience, most of which focused on his current work as co-chair of the philanthropic organisation he cofounded with his wife, the Bill and Melinda Gates Foundation.

1. On building a business as an introvert

“If you’re clever, you can learn to get the benefits of being an introvert, [such as] being willing to go off for a few days to think of a tough problem, read everything you can, being willing to push out to the edge of that area.

“And then if you want to come up with something, to build a company to use that idea, you need to learn what extroverts do. You better hire some extroverts – [Microsoft CEO] Steve Ballmer is an extrovert – and tap into both sets of skills in order to have a company that thrives in both deep thinking and in selling those ideas.”

2. On the role of philanthropy, and his foundation’s toughest project

“The role of philanthropy is to do very tough things,” he said. “The easy things can be solved by government or others. The most difficult thing we work on is improving the United States education system. The idea of how do you measure teachers, how do you give them feedback, help them develop with the right incentives. Very little has been put into that, but if you could make teachers better, impact on equality would be pretty phenomenal.

“That’s the toughest thing we work on, even tougher than inventing new vaccines.”

3. On whether Australia’s wealthy give too little to philanthropy

“I don’t think philanthropy should be promoted to make people feel better,” Gates said. “In a business, you make money and you’re good at it. You understand the metrics and you can see it at work. When you start giving money away, you feel very naïve. And it’s very hard to get it right.”

“Philanthropy all over the world is on the increase, and that’s true of all levels of wealth. I think people who do philanthropy getting together and talking… there’s value to that. All of that will encourage people to come in.

“But they should do it because they’re passionate.

“And you can’t take it with you. So, what’s the alternative?”

4. On capitalism, and recent criticism of it from the Pope

“If you look at life over the last 200 years, or 50 years, or any reasonable period of time, life has improved incredibly. Think about the treatment of women, the treatment of gay people, [the number of] children dying. Two hundred years ago, 40% of all children died before the age of five. People didn’t have the chance to learn to be literate and learn to read books.

“In the span of not too much time, even compared to human history, we’ve made unbelievable progress. The things we take for granted… is pretty phenomenal. Anyone who looks at capitalism and says it’s been a net loss… well, there’s some loss of perspective there.”

“Capitalism, the broad system we’re in which is a mix of the market and the government… has been a great benefit to humanity.”

5. On multinational corporations shirking their taxes

Asked about major technology companies like Microsoft and Apple using offshore companies to avoid paying American taxes, Gates said such issues shouldn’t be “a morality play”, and that such arrangements weren’t “loopholes”, but black and white facts about the American taxation system.

“It’s about the laws. If people want taxes at certain levels, great, set them at those levels. Those companies would be glad to comply to any of those rules.”

“All those tech companies, as far as I know, are absolutely following all the rules about taxation. They’re also fairly big taxpayers. So, if somebody wants them to pay higher taxes, change the rules.

“It’s not incumbent on those companies to take shareholder money and pay huge amounts that aren’t required.

“In a system of laws, it’s very important that if you follow the laws, [and that] you don’t have some other second standard.”

6. On whether his charity’s investments ever contradict its goal to do good in the world

“The assets of our foundation are invested in bonds and stocks. We might own car companies, various things. We don’t own tobacco companies, or weapons companies. And there were a list of companies in Sudan we decided not to invest in.”

“Sometimes we’ll vote against management. There’ve been a few gay rights issues [where we’ve done that].

“But we don’t pretend the nature of our investments is the good we do for the world.

“We’re not the ultimate court of justice – we merely buy investments policed by government, and then do good work with our donations.”

Host Tony Jones questioned Gates about the foundation’s investments in oil companies like Chevron, which have been accused of making children sick through their pollution of rivers in areas where the foundation operations. Gates said the company wasn’t going to sell its shares in Chevron.

“These oil companies are not out to make children sick. If we own 0.1% or not, that’s not going to change any children’s lives.

“We’re in a world of cause and effect; when we buy vaccines and get them out there, we’re into saving lives. We’re not into patting ourselves on the back that ‘Oh, we don’t own shares in that company’.

“So no, I don’t endorse every action of things that I own investments in…We’re not going to take our 1000 people, malaria experts, TV experts and go around and look at every oil company employee.

“The general point is we’re about our grants; otherwise, we’re just a typical investor where the governments are setting the rules.”