What every presenter can learn from Olympic athletes 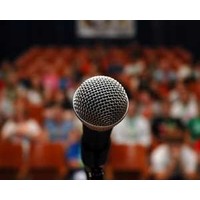 Before the London Olympics are even over, the analysis and debriefing have started into why Australia’s athletes (specifically some of the highly-favoured swimmers) did not win more gold medals.

The general commentary has focused on the athletes’ mental state as opposed to their physical state. Although the athletes were generally at their peak, physically, many of the athletes failed to handle the pressure associated with the greatest sporting stage in the world.

Through the 116 years of modern Olympic history, there have been examples of the greatest athletes failing, and seemingly unknown competitors ‘coming from nowhere’ to win gold.

After years of training, the inability to master their mind can result in performances below expectations. It’s why many Olympic athletes enlist the services of sports psychologists. Sport psychology exists because the human mind can do strange things under stress. Anxiety, nerves and negative thoughts can all cripple an athlete before their event. It has been reported that for the first time in 20 years, the Australia swimmers went to the competition without their own professional sport psychologists.

Watching the effect nerves and stage fright have had on our most highly-fancied Olympians, I couldn’t help but draw parallels between an Olympic athlete’s mindset and that of successful presenters.

Most people who present no doubt experience nerves, negative thoughts and stage fright, with a detrimental impact on their performance.

Given that the most common phobia is fear of public speaking; these states of mind are normal. Being able to master your mind before your next presentation will set you up for success and make presenting a much more enjoyable experience, for you and your audience.

Granted, the audience at your next presentation may not be on the global scale of the Olympics, the consequences of losing or benefits of winning not so dramatic and the sacrifices perhaps not as significant.

Yet for anyone who has to deliver presentations there are three key techniques we can learn from Olympic athletes. And all of them relate to your mindset.

You may have experienced some of these sensations before a presentation: feeling nervous as hell, you can’t remember your opening line and you are fighting your greatest natural human instinct to flee.  When this occurs you will be well served to find some space and a few minutes and actively focus on slowing your breathing.  Slowing down your breathing reduces your heart rate and signals to your mind that all is calm. The key is to identify the early onsets of nervous tension and start this technique immediately.

After swimmer James Magnussen failed to meet expectation in the men’s 4×100 freestyle relay, he said: “The morning of my race my hands were shaking and my heart was beating out of my chest”.  Perhaps an attempt to slow his breathing may have helped.

In the lead-up to the 1996 Atlanta Olympics, the once-feared Australian men’s rowing team, the ‘Oarsome Foursome’, were not rated highly. They only just scraped into the final and against all odds won the gold medal. Sport psychologist Jeff Bond had worked with the Oarsome Foursome on positive visualisation in the lead-up to Atlanta. “We’d run through the warm-up, and then paddle to the start and then I would talk them through the race,” he said. They went through this process of visualisation hundreds of times and “the actual race went exactly – exactly – as they planned it”.