What leaders can learn from the life of Sally Ride 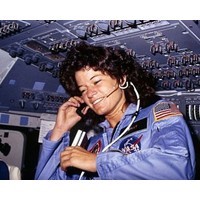 Sally Ride, the United States’ first woman astronaut, died too soon this week at the age of 61.

In 2012, it’s perhaps easy to forget what she was up against when she rode into space on the shuttle Challenger in 1983. As the New York Times pointed out in its obituary of Ride, comedian Johnny Carson joked on The Tonight Show back then that Ride would probably delay the shuttle launch while looking for a purse to match her shoes. It wasn’t funny then or now.

Ride was a woman and a person to be taken seriously. She was smart, determined and not one to allow biases to hold her back. In obvious and not-so-obvious ways, she was a pioneering role model of a leader. A close read of the Times’ obiturary on Ride yields a number of lessons for leaders from her life.

See yourself in the role

Ride became an astronaut after responding to a recruiting ad she read when she was a student at Stanford. With degrees in physics, astrophysics and English, Ride recalled that she read the qualifications from NASA and said, “I’m one of those people.” It didn’t matter that she didn’t fit the gender stereotype (or, for that matter, the age expectations – when she flew at age 32 she was also the youngest US astronaut in space). One of the core challenges for leaders is to confidently see themselves in the role. Ride did that and more.

After being accepted into the astronaut corps, Ride switched her academic focus from physics to engineering because she thought that would have more application in her new profession. She went on to help develop the space shuttle’s robotic arm and was chosen for the Challenger crew by its commander in part because of her proficiency with the device. Leaders consistently face changing requirements to achieve the goal. The successful ones stay flexible and adapt to the situation.

Ride was the only person to serve on the investigative boards for both the Challenger and Columbia shuttle disasters. She balanced her love for the space program and loyalty to NASA with tough questions during the hearings and support for witnesses who had the courage to say what went wrong and why. It can be tough for leaders to get the full story because people often tell them what they think they want to hear. Sally Ride didn’t settle for anything less than the full story.