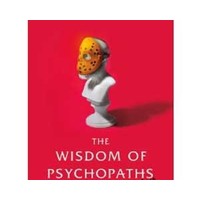 Some psychopaths are good guys – it can’t be denied. Like the dental surgeon who yanked out one of my molars recently. He kept wrestling it out of my bleeding gums despite the tears rolling down my face. I needed that guy to keep going when no one else could have. I couldn’t expect him to be the one giving me a pat and a cup of tea afterwards.

Corporate leaders are often accused of being psychopaths. This is in part because a 2005 study by two researchers at the University of Surrey who compared the psychopathic profiles of business managers with psychiatric patients and hospitalised criminals.  “Their analysis revealed that a number of psychopathic attributes were actually more common in business leaders than in so-called ‘disturbed’ criminals …” writes author Kevin Dutton, in his book, The Wisdom of Psychopaths.

The difference between business leaders and the criminals or insane, the study found, was the level of “antisocial” feelings.

Dutton’s provocatively-titled book posits the theory that we can learn lessons by studying the qualities exhibited by psychopaths.

He writes: “Psychopaths, as we will discover, have a variety of attributes – personal magnetism, and a genius for disguise being the starter pack – which, once you know how to harness them and keep them in check, can confer considerable advantages not just in the workplace, but in everyday life.

“Psychopathy is like sunlight. Overexposure can hasten one’s demise in a grotesque, carcinogenic fashion. But regulated exposure at controlled and optimal levels can have a significant positive impact on wellbeing and quality of life.”

Dutton does not take his contention lightly, however. He crosses the world talking to researchers and experts, as well as with psychopathic criminals, to investigate his proposition.

What is clear at the end of Dutton’s exploration is that psychopathy occupies a kind of sliding scale. In some circumstances, we all see values in these attributes; but once the tendency tips past a certain point, the individual is lost in a moral vacuum, without concern for their victims.

It is dangerous territory to explore.

For those in high places, and those who want to be, The Wisdom of Psychopaths’ value is as much for the chilling and cautionary interviews Dutton has conducted with serial killers and con artists as for his playful and witty exploration of benefits we might all find from traversing this risky hinterland.

No matter the discomfort of the analogy: leaders are already closer in behaviour to psychopaths than most. When asked to complete a self-score psychopathy scale, CEOs topped the list of those on the plus-side. They were followed by lawyers, television and radio presenters, salespeople, surgeons, journalists, police officers, clerics, chefs and civil servants.

Here’s just a snapshot of what leaders can learn from psychopaths.

It’s hard to make a psychopath sweat. The higher the stakes, the bigger the risk, the more they love the game. In a study when a mix of participants gambled away $20 they were given, the psychopaths won easily. In the game, losing cost a dollar, but winning reaped $2.50. Normal people became increasingly cautious as they suffered loss. The psychopaths thrived on the risk.