Why Australia needs to get serious about leader debates 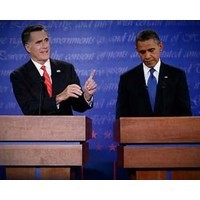 Only a month ago the outcome of the US presidential election was seen my most commentators as being a question of the margin of President Barack Obama’s victory. But then the television debates intervened. Obama’s lacklustre performance in the first leaders debate, a democratic innovation that began with Kennedy and Nixon in 1960, made the president appear complacent and lacking focus.

From then, whether in the subsequent debates or any other intervention, the narrative was set for the last weeks of the campaign. Would Governor Romney’s “bounce” sustain? Could the president regain his standing? Few would now argue those debates weren’t important.

Politics has many characteristics, but when you get to the pointy end of the electoral process in the United States, it is certainly high drama. But debates also create key moments where the electorate can observe alternative leaders responding to focused questioning. With each candidate on the same platform and at the same time, debates provide structure to a campaign: a time to scratch beneath the surface of the well-rehearsed lines and phrases and shed light on the style and character of the candidate.

They are, as is the case in other liberal democracies in Canada, France, the United Kingdom and  –until the 2010 campaign – here in Australia, generally positive contributions to the democratic process.

In my role at the Institute for Democracy and Human Rights I have spoken with those involved in broadcasting and negotiating leader debates in four jurisdictions. I have spent hours watching Gore, Hawke, Bush, Bush (again), Clinton, Mitterrand, Reagan, Cameron, Howard and Gillard.

The high points are few: John Hewson and Paul Keating in 1993 having a sharp exchange regarding their respective views of the role of the government supporting a public health system; Ronald Reagan making President Carter appear smaller and smaller as each moment passed in 1980; and the innovation of the first prime ministerial debates in the UK two years ago. But what we learn from the debates themselves is less important than what we learn from the process surrounding them.

Leader debates fulfil a more important role than an hour and a half of television. Competing policies and characters are presented and assessed in the wider media.

These numbers don’t reveal how many people engage with the substance of the debates through newspapers, radio, television, or on their smart phones and computers. In 2010 all the major UK newspapers ran pages of analysis following each debate. In the US, numerous news sites ran immediate fact checks on what was said and developed engaging ways to explain differing perspectives and policy positions.

Breaking eggs to make an omelette

Of course, the situation in the US is not the same as in Australia. In the US the electorate has very little exposure to their prospective leaders prior to the debates. In Australia, we get to see our alternative leaders in Question Time whenever parliament is sitting.