Why Ballmer’s laughing all the way to the bank 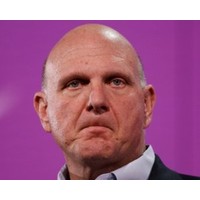 Microsoft chief Steve Ballmer, who announced his retirement over the weekend, is one of the most ridiculed and reviled men in corporate America.

Unlike many people who made their mark in the years leading up to the dot.com boom, Ballmer wasn’t a techie. A maths and economics major at Harvard University, he lived down the hall from Bill Gates, who (when Ballmer was just 24) convinced him to become Microsoft’s first commercial manager in 1980.

He’s been with the company ever since, and took the reins from Gates in 2000 when the Microsoft founder stepped back from day-to-day management.

Microsoft’s profits have doubled while Ballmer’s been in charge, but he’s been derided for a series of bad calls, as well as for allowing companies like Apple and Google to steam ahead of Microsoft in net worth and market share.

Ballmer’s missteps are well-known. The Windows Phone and Surface tablets have proved too little too late, and critics say he has merely maintained the performance of successful divisions – new projects have proven unsuccessful. He famously laughed at the concept of the iPhone when it was first announced.

But what’s less recognised is the fact that he is one of the richest men in the world.

Bloomberg reckons he’s worth $US16.8 billion, putting him towards the top of the 1400 names on the global billionaires list. Ballmer’s fortune is well short of Bill Gates’ $US72.4 billion, but ahead of that of more celebrated tech luminaries like Michael Dell ($US15 billion).

No doubt satisfyingly for Ballmer, his fortune even eclipses that of the late Steve Jobs. The Apple founder’s widow is worth just $11.1 billion.

And that’s not even counting any golden parachute he might get when he steps down.

Most of Ballmer’s fortune comes from Microsoft. When he joined the company in 1975, he was given an 8% stake. Today, he owns 333.3 million Microsoft shares (which adds up nicely given shares are going for $US34.75 a pop today). That’s after the millions in shares he’s sold over the years. Bloomberg estimates he’s gained more than $3.4 billion from selling his shares and more than $2.7 billion in Microsoft dividends over the years. Bloomberg also estimates he’s sitting on $5 billion in cash and other investable assets.

This means no matter how hard Silicon Valley cheers Ballmer’s imminent departure, Ballmer is unlikely to be too fussed by the whole thing. He’s the 44th richest man in the world, and now, has a lot more time to enjoy his money.