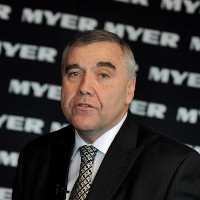 While Brookes previously said he intended to part ways with Myer this year, he told SmartCompany in an exclusive interview he plans to stay in the chief executive role for “a few more years”.

“Over the next couple of years there is a tonne more to do,” says Brookes, who last week delivered Myer’s results for the 2013-14 financial year.

While Myer’s gross operating profit continues to fall, dropping 1.4% to $1.286 billion for 2013-14, and the department store’s cost of doing business is on the rise, up 3.3% to $1.033 billion, Brookes says the real story is the extent to which Myer is investing in its future.

‘We’ve invested about $60-70 million in establishing our online website, our online presence,” says Brookes, who says the investment in improving Myer’s digital offering won’t be slowing down.

And while Brookes says higher penalty rates and wage growth since the introduction of the Fair Work Act has been the main driver behind Myer’s increasing costs of recent years – “We’re paying $40 million more in wages this year for the same amount of hours than what we were two years ago and that’s a horrific number” – it’s now the retailer’s “investment in the future of the business” that is affecting costs.

“From our point of view we’ve got an opportunity while we’re under attack from overseas competitors, an opportunity while David Jones are renewing themselves to take advantage of that situation and go very strong over the next 12 months and we now have the funds to do that,” says Brookes.

“You look at the most successful retailers around the world, Walmart is an example, they continually invest back into the business, reducing supply chain costs, using technology. John Lewis Partnership in the UK and Nordstroms in the US are all good examples of business that are successful because they have reinvested back sizeable sums of money, and more importantly, investing back in the business for what you would call ‘what the future holds’.”

“There’s no good sitting there and saying we’re not going to do that because we don’t know what the future holds …. You’ve got to try to think about where the customer is going to be rather than where they are today.”

Brookes’ plan for Myer’s digital offering is much more than a traditional website, and even more than the current ‘bricks and clicks’ model of retailers integrating a website with its physical stores.

We’re on the brink of what he calls “the new retail” and that means finding a way of connecting every possible means a consumer has of interacting with a brand in a “seamless fashion”.

“It’s loyal, it’s social and it’s what you would call an ecosystem that enables you to have a product at the centre with the customer transacting in whatever way, wherever they want and on whatever operating platform they want,” says Brookes.

“That’s where we’re heading and investing significantly in … we’re a fair way down the track and it’s now resulting in significant sales.”

Brookes admits the early adopters of e-commerce in Australia, including daily deals sites such as Catch of the Day, Grays Online and DealsDirect “had a real free kick for a while”, but he says Myer’s website sales doubled during 2013-14 and had doubled the previous year as well.

Brookes would not divulge the amount Myer derives from online sales but says “it’s really starting to become a significant part of our business … in some times it’s equal to our number 10 store.”

“But transacting online is only one part of the equation and it’s actually going to become the less important part going forward.”

Brookes is excited about the roll-out of a new app which will allow Myer customers and salespeople to access more than 190,000 items via an in-store iPad. All Myer stores will have access to the app by the middle of next month, allowing “your smaller stores [to] be your bigger store”.

“So now we’re starting to see the true concept of online.”

After Christmas, Myer customers will also start to see a difference in the way the retailer communicates with them, with Brookes saying Myer is in the process of receiving data from “the most elaborate research project we’ve ever done”.

The data will go to Clemenger, which has been appointed to give the entire Myer brand a “refresh”.

“They will take all of the information and they will look at the brand, the colour, what we stand for, what our target market is, what our visions and what our values are, on the basis of coming up with how we communicate with customers,” says Brookes.

“[It] will be a different sort of view of what Myer is and what it can stand for …. Because Myer was ‘My Store’ but today Myer is online, in-store, on Facebook, we’re Sass & Bide, we’re brands, we’re a very different business.”

Please click below to keep reading this story on page 2.