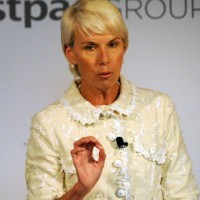 Female chief executives are still very much in the minority in Australia but they earn a higher annual salary than their male counterparts. According to new research, released earlier this week by Qlik, female CEOs receive an average annual salary of AUD$4.1 million per year, compared to an average salary of $2.5 million among male CEOs. The smaller pool of female CEOs are concentrated in banking and finance companies which is one explantation for the higher average.

Men, however, still hold the CEO position at 95% of Australia’s top 200 companies as listed on the Australian Securities Exchange.

Whilst the female CEO salaries are positive, the data shows that the gender gap between females and males in the workplace is still very much present in the Australian business environment.

The data was analyzed using a new Qlik Sense app called ‘Where do CEOs Come From’, which aims to uncover the anatomy of CEOs from the top 200 ASX list.

Sharryn Millican, Vice President and Regional Director, ANZ at Qlik said, “This new app built on Qlik Sense helps to uncover the anatomy of the CEO in Australia, allowing us to find out what the ‘key ingredients’ are to become a ASX 200 CEO.”

“As a female executive myself, its surprising to see that little has changed when it comes to the lack of gender diversity in the boardroom and the fact that the average CEO is still likely male and his fifties,” said Millican.

In addition to men holding far more CEO positions, men also reach the top of the corporate ladder at a young age – the youngest male CEO is currently 37 years old, while the youngest female is 47.

Interestingly, however, it was found that females stay in their higher management positions for longer, with the average duration being 6 years, compared to males at only 5 years.

Overall, it seems males still remain in the top spot later in their career with the oldest male being 72, whilst the oldest female only 58. The average age of both male and female CEOs is 54.

When it comes to education, 96 % of CEOs attended university, with more than half attending an Australian university.

The most popular subject studied by the CEOs was business and 17% of CEOs holds an MBA.

The data reveals what we already know is true – the gender gap between males and females persists. The evidence of higher pay for female leaders can be seen as a positive step in the right direction. Now all we need to see is more females in the top spots earning these higher annual salaries.