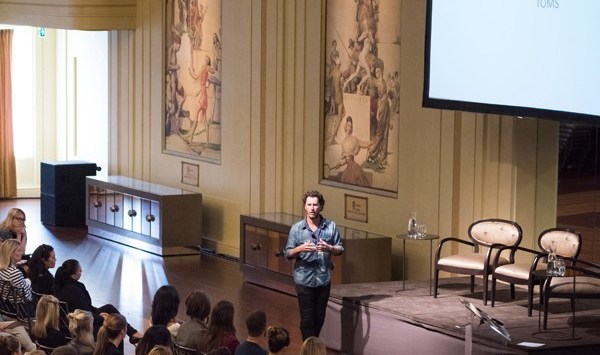 For entrepreneur Blake Mycoskie, the act of giving is fundamental to business success.

Mycoskie is the founder of popular ethical shoe brand TOMS and during a visit to Melbourne this month, he advocated for continuing cohesion between business and philanthropy.

The 39-year-old is attributed with pioneering the one-for-one business model: for each pair of TOMS shoes purchased, a pair is given to a child in need.

This year marks the 10th anniversary of the TOMS brand, which Mycoskie founded in 2006 after rising to notoriety on US television show The Amazing Race as the contestant who caused his team to lose the million-dollar prize by just four minutes.

TOMS now gives away shoes in 60 countries and according to The Guardian, the company was valued at $US625 million ($890 million) when private equity group Bain Capital purchased a 50% stake in 2014.

Speaking at an event to launch a partnership with Australian NGO Save the Children and the Australian Olympic Committee, Mycoskie shared the story of how TOMS started and his top tips for an ethical business.

1. Use entrepreneurship and business to solve the problem

TOMS began when Mycoskie took a month off to visit Argentina, after spending between 80 and 100 hours a week launching an online driving education company. While on holiday, Mycoskie spent a day donating used shoes to children in Argentina.

The day felt initially heart-warming but Mycoskie says it led to pangs of guilt.

“What happens when people stop making donations? When there’s a hurricane or a tsunami and people are putting their efforts for that?” Mycoskie says.

For these children, who would need new shoes almost every five months from growth spurts, one random donation would not suffice.

Mycoskie used his business background to consider the shoe business, the basic maths involved and the significant mark-up that would allow consumers to buy a pair of shoes for themselves and fund a donated pair.

2. One-for-one is a human idea

The concept behind TOMS shoes, of being able to buy something and help someone at the same time, is a very human idea that transcends geographical boundaries, according to Mycoskie.

Just a year after starting the venture, 10,000 pairs of TOMS had been sold.

“Today we’ve been able to give 50 million pairs of shoes,” Mycoskie says.

“The reason we’ve been able to grow and evolve is because I believe humans truly want to help one another.

“I believe that given the choice between purchasing something where there’s going to be profit on the bottom line versus one that can be caring for the planet and its people they will make that choice.”

Mycoskie is often asked for his “epiphany moment” for when the notion for TOMS struck him but he says a winning idea doesn’t have to be particularly big.

“Often times when a business has success things get kind of mythical and the truth is it wasn’t a big idea,” he says.

“It was a very small idea: wanting to help 250 kids. And had it only stayed that way and had it only helped those 250 kids, it still would’ve been awesome.”

“The truth is had it not worked it still would’ve been an idea worth creating.

“When I think back to the life-changing moment that everyone wants to talk about, it wasn’t the idea, it was actually when we first went to deliver the shoes to the village.”

“Giving feels good…and that in itself is a reason to do it,” Mycoskie says.

“Giving incorporated in an authentic can have a positive impact on your business and your personal brand.”

Mycoskie believes spending on traditional advertising is not necessary: if your story is important, your supporters will tell your story.

“What we found is our customers became our marketers, no one who wore a pair of TOMS in that first year or two didn’t tell our story,” he says.

“We didn’t ask them to but they were proud to tell the story.”

“Business is all about people and how you can track, retain and motivate and what I’ve found is the best way to keep people motivated is to give them a purpose and not just a pay check,” Mycoskie says.

By having a vision to be a for-profit social enterprise business, TOMS is able to keep consumers invested in the TOMS mission.

“We have a purpose beyond profit,” Mycoskie says.

The future of TOMS is now in not only donating pairs of shoes, but offering other services, such as vaccinations or eye surgery.

TOMS are now manufacturing in many of the countries where the giving takes place, thereby adding an additional aspect of supporting social enterprises, something Mycoskie hopes other businesses will adapt.

“When you make your life about something that is more than your own personal gain then people want to partner with you, they want to see you be successful,” he says.

It’s exciting to see how Blake M. and his company TOMS have done so much good and continue to do so by educating others