Behind the scenes at Virgin: The joys and trials of rebranding an airline 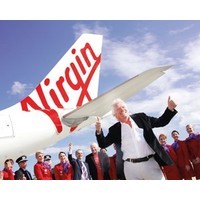 Most of Virgin’s customers were confused by the whole thing, and the brands were primarily associated with discount flights. Rebranding the airline was central to Borghetti’s turnaround strategy.

The man he entrusted to do it was Hans Hulsbosch, who for 32 years has run the award-winning Hulsbosch, one of Australia’s leading corporate branding consultancies.

Hulsbosch immigrated to Australia from Europe in 1979. He had a background in advertising, and quickly got a job as creative director of ad agency Clemenger in Sydney.

“Coming from Europe, design plays such a key role there,” he told LeadingCompany yesterday. “I felt that was really missing here. So I started out on my own.

“Slowly but surely, we’ve built up a good cliental. I’ve been able to rebrand many of the big companies.” Hulsbosch’s clientele includes Qantas, Woolworths, Perpetual, Foxtel, AMP and Rebel Sport.

He first met Borghetti at Qantas (where Borghetti was then executive general manager), when doing branding for the A380s and Dreamliner aircraft that were released in 2006.

Hulsbosch thus had some experience in aviation branding. But despite his aviation experience, Borghetti set Hulsbosch a steep challenge at Virgin: to do the rebrand in just one year.

“A good program like that – it would normally take two and a half or three years,” Hulsbosch says.

“But JB, as we call him, said we didn’t have the time. It had to be done ‘now’. We had to work on it constantly to get it done. But it was very exciting.”

Borghetti hoped to unite the disparate Virgin brands operating in Australia into one brand.

“The priority was to create a contemporary brand that would appeal to both businesspeople and the general traveling public,” Hulsbosch says.

“Virgin Blue was a low-end, discount brand that operated with one class,” Hulsbosch says. “That wasn’t an image we wanted to go forward with. It was struggling anyway, so it was really time to turn the brand on its head.”

“We wanted to create a brand people felt really good about – a more contemporary, smarter, simpler offering. It wasn’t just the aircraft, but also impacted the lounges, the way you go online, the literature. That whole journey from beginning to end had to be looked at, and had to change.”

Rebranding an aviation company is an engineering challenge as well as an artistic one.

“The key issue is you have to understand the weight issues,” Hulsbosch says. “Fuel can be 30% of the cost of operating an airline. So everything you touch and do, you have to design in such a way that it weighs as little as possible.”

It’s not just about weight. Everything from chairs and carpets to toilets is burns-tested. Aviation regulators have strict rules about how long things should take to burn. If something caught fire quickly, Hulsbosch and his team, assisted by two Virgin engineers, would normally start again. “But starting again, in this case, wasn’t an option. We only had a year! So everything we touched had to be thoroughly thought through before we started so it passed the tests.

“It was good fun once we got into it,” Hulsbosch laughs. “I’ve been working for Qantas on and off for 20 years. So I knew a bit about this kind of design. But at Virgin, there were all new challenges.”

In branding or rebranding a company, Hulsbosch says having trust from the CEO makes a big difference.

“Borghetti had a very strong vision, and knew what he wanted. Once you start working with people like that, the job is much easier.

“But the other thing is, you need total trust. From both sides. If a CEO is only prepared to give you 75% of his trust – then usually he gets 75% of your capabilities. The CEO needs to know that when I’m in France or the US, when I make decisions, he trusts me to make the right ones.”

Design can often be an emotional pursuit, and Hulsbosch acknowledges not all CEOs are willing to trust a designer with their brand.

“CEOs who are purely focused on turnover and net profits sometimes don’t understand what branding or design actually means,” Hulsbosch says. “A lot of the time it’s highly emotional. We deal with feelings. In Virgin’s case, that could be the leather, or how you communicate with crew. Some CEOs find these things very difficult. It can make the job hard.

“But then again, some companies do it perfectly. A great example is Woolworths – when we worked with them, they really got branding. So it was a dream run.”

Hulsbosch says branding is more important to companies than it’s ever been before.

“It used to be that people read a lot. Now it’s all visual. Your whole communication has become a very visual thing. In our field it has taken years and years to get that through to companies, and it’s still not always rosy. If you have a product, and it’s not branded right, you’ll fail to communicate with your customer.

“I look at the way some of the banks brand – they’re very cold and hard. And they bitterly fail at communicating with their audience. But aviation, because they’ve always competed on a global playing field, they brand well. They all fly in [the same kind of] rockets and all, so their brand and their customer service is very important to them.”

But, he adds, for Australian companies it’s mostly good news. “Ever since the Sydney Olympics… we’ve become much, much better at branding.”