Collaboration and the value of the dissenting voice 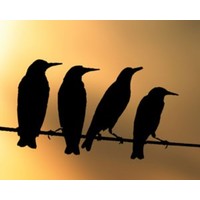 Although the word collaboration can conjure up images of people working happily together, I rather think we would get closer to reality if we included a few arguments, some eye-rolling and some exasperated over-emoted sighs to round out the picture.

Mostly this kind of friction happens because, as individuals, we differ from each other in culture, experience and skill. The perspectives we hold come from those things. And, as human beings, we can cling to them stubbornly, shutting out the possibility that there may be another way.

But, if we want to truly extract the best ideas and create the best outcomes, we must be prepared to include the likelihood that our view is not always going to be the best. That means making room for the friction and the dissenting voices of those who look at things through a different lens and have the courage to share what they see.

Here’s a quick and entertaining example from the great comedy team of Abbott and Costello.

I don’t know about you, but at times, I have discounted the opinions of others because their logic sounded wrong or what they were saying had, in my view, no bearing on the matter at hand. In those situations, I wonder what might have happened had I spent just a few more minutes listening and trying to understand. Of course, there was always the possibility that what was being said was complete drivel. But, it was equally possible there was something there of great value that was lost because I failed to take the time to really listen.

In a world where time is at a premium, I don’t suppose the behaviour I describe is unique. So many of us spend our days striving to get to the end, or accomplish a goal and yet sacrifice the quality of what we produce by ignoring the voices that don’t seem to have a place on our personal radar screens.

For instance, to make room for the dissenting voice I think it helps to:

Some people can feel overpowered by the common opinion.  In fact, they may believe their own view to be less important because it is different. And so they stay quiet so as not to rock the boat. Drawing them into the conversation can make it more real and provide the opportunity for a wider variety of ideas to be shared.

Of course if you make room for the dissenting voice, you also must make time for people to ask questions, explore, challenge and think about what is being said. It may take longer but the conversation will be enriched because of it.

Give the ‘dissenting voice’ a place at the table

That means, when you come together to discuss some aspect of your work together, assign a virtual place for the ‘dissenting voice’. Over the course of your discussion, stop from time to time, and invite people to place themselves in a perspective that they may not currently hold. Sometimes this will give rise to a new idea that may not have otherwise surfaced. It will also encourage those who really do think differently to become part of the conversation.

Conversely, if you differ in experience, perspective or opinion from the rest, I think it helps to:

Find the courage to stand up and speak

While it can be nerve-wracking to stand up and share an opposing view, it can also be very liberating. Little is accomplished by waiting until a meeting is over to voice an adverse opinion, to no one in particular. If you want to be counted in, stand up and be counted. It matters.

Sometimes a well-placed question can slow the momentum of a meeting long enough to allow thoughts to take a much needed detour.  Questions that begin with “What would happen if….?” or “How might ‘X’ apply to this situation?” can spark ideas not yet explored.

Explain the relevance of your view to the subject at hand

If your view represents a big departure from the prevailing thinking, you stand a better chance of having it heard if you explain how it connects with the subject under discussion and the value it brings to realising a successful outcome.

Abraham Lincoln has been quoted as saying: “It is the man who does not want to express an opinion whose opinion I want.”

From that I surmise that Mr Lincoln was keen to be informed on many levels, to solve the right problems and to make good decisions more often than bad ones.

When it comes to working collaboratively, I expect that’s what we all want.

That’s what I think, anyway.  What do you think?