Dream Office: The joys and perils of a talkative workplace 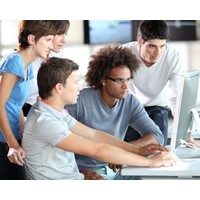 Some workplaces are quiet. Some are not.

This can be bewildering for those who’ve recently moved organisations. Where they used to say hello to everyone and chat about their day, at their new organisation people come in and out when it suits them, and don’t bother talking much in the process. Going the other way can be just as unsettling – it can be hard for those used to peace and quiet to concentrate when there’s lots of buzz around them.

Most businesses strive to create an engaging and interesting work environment. But they can differ entirely on how much they want staff to talk as they do their job.

It is leaders who decide on what tone their office should take, so what should they aim for? Is a quiet office more productive? Or can innovation only happen in an environment where speaking up is nothing unusual?

What determines the level of office bonding?

Most companies have varying levels of HR-driven special events – such as lunches, barbecues, picnics and drinks nights – intended to solidify working relationships and to help people get to know each other in an informal setting.

But this doesn’t determine the vibe of an office. While it can tip it one way or the other, most of what employees remember about the place they work is determined by what it’s like to work there on a day-to-day basis.

The amount of casual chit-chat is determined by a couple of factors. Some are psychological, while others relate to design.

Corporate psychologist Leanne Faraday-Brash says when it comes to the level of chatter, there’s an interaction between the workplace norms set by a company’s leadership, and the individual personalities of the people in the office.

There are other, non-psychological facets to how noisy or otherwise a workplace is. Office design plays a key role. Open-plan offices encourage chatter, but it’s not enough on its own. Studies have found that while people who work in open-plan offices talk more, their talk is also far more functional (“do you have those files”) than the idle chatter heard a corporate water-cooler. Employees are less likely to let their guard down when they feel their every word is likely to be heard and noticed.

Office design also impacts how often people talk to each other in another way.

There’s a name for how you probably never talk to anyone working on a different floor to you. It’s called the Allen Curve. In 1984, organisational psychology professor Thomas Allen published a book most famous for his analysis of the frequency of interactions in a multi-storey R&D complex full of engineers. His study, conducted before the open-plan office was popularised, found interactions between different workers declined exponentially depending on the distance between their offices. Even when they were in the same building, researchers on different floors almost never had anything to do with each other. This effect starts to take place when people are 50 metres or more apart. When he updated his research in the early 2000s to take account of the internet and other virtual communications, he found nothing had changed.

Allen’s findings have played a big role in corporate office design, with many newer offices encouraging interaction between staff through shared central spaces.

This trend towards shared spaces for discussion is also driven by another emerging factor – telework. As workers increasingly expect the ability to work from home, the purpose of the office is changing. No longer is it a place where workers can access the equipment they need. So leading companies are reimagining it as the nerve-centre, where workers come to interact and innovate.

In recent years, leading companies have revamped their offices, adding break-out spaces and abolishing desks, or as the jargon would describe it, moving to “activity-based working” environments.

But can all workplaces become chattering hives of collegiality? Not really, given the impact a company’s business model often has on how much staff talk to each other.

Client-focused workplaces where staff are constantly dealing with people other than their colleagues can mean they relish a chance for peace and quiet when they’re not dealing with clients. Factories with three people to a floor are likely to have minimal interaction between staff. Leanne Faraday-Brash says in her experience, operating theatres are full of lively chit-chat. “Sometimes it’s personal, sometimes it’s cheeky,” she says. “But only after the patient has gone off to sleep.”

The benefits of close co-workers

“It’s critical, and the reason is about recognition,” he says. “Recognition can, of course, come in many different formats, but the acknowledgement of someone’s presence is a major part of it.”

Businesses that don’t make people feel valued can often gain a reputation for having a “bad vibe”, which ultimately, Nally says, can make hiring and hanging on to staff more difficult.

“The most important thing a leader can do is to model good behaviour. Say, ‘this is important, and we’re going to take the trouble to recognise people around here in different ways’.”

For some people, friendships and recognition are a key part of what drives them at work. Motivational psychologist David MccLelland identified three drivers that motivate people at work: the power drive (the ability to influence and lead); the achievement drive (which relates to the outcomes someone achieves); and the affiliation drive (the connections and social atmosphere of their workplace). Most people have one or two dominant drivers.

“For those with the affiliation drive being dominant, having friends at work is hugely important,” Faraday-Brash says. “They need that to make their work fun and engaging.”

Close co-workers are also able to more efficiently allocate tasks according to their strengths and preferences, she adds. “If they’re cohesive, they’re more willing to make allowances if someone is stressed or struggling with the workload. The ‘care factor’ is higher, and so the work can get done more efficiently.”

Relaxed, friendly workplaces are also a hallmark of creativity and innovation.

The perils of a friendly workplace

However, there are costs to having a chatty workplace.

The most obvious is time-theft. “Obviously, the social atmosphere at work can be a huge distraction, especially when people have time-based tasks to perform, or when they prioritise socialising over work,” Faraday-Brash says.

Highly social workplaces can also put part-timers at a disadvantage.

“Part-timers often have to be really efficient,” Faraday-Brash says. “They’re ruthless about spending the time at work on the work, so they can get the most done in the time they’re allotted. With many part-timers – particularly women who have family responsibilities – they don’t go to meetings where they don’t add value, they don’t go to lunches, they’re highly intentional about how they spend their time. They feel like they can’t afford to spend time socialising.”

The same issue crops up with those working from home, who sacrifice office chit-chat for convenience.

Reaching a balance for everyone

For business leaders, it’s a catch-22. Extroverted people can often imagine nothing worse than sitting quietly and doing their work, but others can’t stand distractions.

It’s a difficult balance to handle. Faraday-Brash suggests that instead of fussing over whether their workplace is noisy or quiet, leaders instead work to foster an atmosphere that’s flexible and accepting.

“It’s so easy to judge if people don’t do things the way you would,” she says. “But different people do their best work in such different circumstances.

“Leaders should make it OK for people to have different work styles. They should create environments where people respect difference. If Mary needs peace and quiet to think, there should be space for her to do that. If she blocks out time in a meeting room and closes the door, she should be left alone.

“People should be free to situate themselves where they work best.”