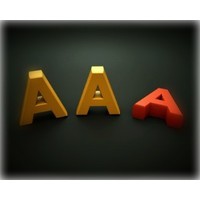 Governments fret over their ratings, companies trade on their credibility and journalists hold up their findings as evidence of doom and boom.

But after sustained criticism and dozens of law suits, could the ratings agencies be going broke?

That extraordinary question was posed by the executive director of litigation funder IMF Australia on Monday.

John Walker, who funded a successful class action case against Standard & Poor’s in Australia, says the cases facing ratings agencies in Europe could send S&P, Moody’s and Fitch broke, as the claims could exceed their net tangible assets.

“You can’t get blood out of a stone,” he told the ABC.

“We’re reasonably comfortable for payments in excess of $1 billion, but where money is needed to be paid greater than that sort of sum, then the ratings agencies may not get the support of the capital markets and potentially they are a credit risk.” In 2012, Moody’s operating income was $1.077 billion.

It’s a long way to fall for the ratings agencies, who’ve had a run of legal trouble in recent years. On Friday, S&P and Moody’s settled lawsuits with 14 plaintiffs over the ratings the agencies gave securities that unravelled in the global financial crisis. The settlements are confidential, but reportedly did not include an admission of guilt.

It’s not the first time the ratings agencies have had to deal with a lawsuit. Many of the toxic assets that came undone during the global financial crisis, like the securitised sub-prime mortgage loans and credit default swaps, were given triple-A ratings by the ratings agencies in the years leading up to 2007. As the global financial system collapsed, many sought to take their grievances out on the agencies whose ratings they said they relied on.

As a result, ratings agencies have lost credibility, says Imad Moosa, a professor of finance at RMIT. Moosa is a former financial analyst and investment banker, as well as economist at the International Monetary Fund.

He’s advised for KPMG, the US Treasury, and the United Nations, in addition to his academic work. And when it comes to the three agencies, he’s scathing.

“Given their performance during GFC, I’m surprised they haven’t shut up shop,” he says.

In its report on the global financial crisis, the US Financial Crisis Inquiry Commission wrote that, “the three credit ratings agencies were enablers of the financial meltdown,” without which the crisis could never have happened. It added that from 2000 to 2007, Moody’s rated nearly 45,000 mortgage-backed securities as triple-A.

This leads Moosa to speculate the securities must have been submitted at 10am and rated by 10.20am. “It was free money,” he says.

Pressed on whether credit agencies are a necessarily evil, Moosa disagrees.

“The world’s best investors don’t use them anyway. The George Soros of the world, the Warren Buffetts, they don’t listen to the ratings agencies. They do their own analysis, and reach their own conclusions.”

“I think the influence of ratings agencies has diminished a lot after the outcry against their activities.” After the US credit rating was downgraded to AA from AAA last year, Moosa says, it didn’t cost the US Treasury any more money to borrow funds.

The ratings agencies say they did the best they could at the time.

“Our ratings were based on the good faith judgment of our analysts,” S&P told the ABC two weeks ago, after the announcement of another law suit against it.

But ask the critics, and the ratings agencies suffer from a conflict of interest inherent in their billing structure.

Agency ratings are freely available to investors. They’re free to look up and use. The agencies make their money by charging the companies and governments who pay to be rated.

Critics argue this creates a conflict of interest, which played a key role in their optimistic ratings.

“Investment banks used to shop around,” Moosa says. “Securities were rubber-stamped in the thousands without any due diligence.

“I’m of the view that those guys didn’t have a clue. They aren’t qualified to assess the risks in these complex securities. In a lot of cases, neither were those who invented the securities. They made monsters they didn’t understand.”

But while he says the influence of ratings agencies has decreased, Moosa believes they will regain their clout over time. “They’re very well-connected with the regulators.” Moosa says that after the global financial crisis, when countries like Iceland went bankrupt, there was real political capital to be gained in coming down hard on the agencies. New regulations, improved disclosure requirements and law suits were part of this crackdown.

But Moosa does not expect this to last.

“One of the regulatory theories I subscribe to is called capture theory,” he says. “After a while, powerful firms control the regulators, not the other way round. That’s what’s happened in this case.”

From 2010, Australian regulators stopped small (‘retail’) investors directly accessing ratings agencies by considering ratings as financial product advice. To provide advice to retail shareholders in Australia, institutions have to hold an Australian financial service licence, which the ratings agencies don’t. But all that happens if you go to Fitch’s website is it asks you whether or not you’re a retail investor. Click the circle marked ‘no’, and you’re in.

However, the courts have taken a tougher stance. Last year, the Federal Court ruled S&P had been misleading and deceptive in its publication of a AAA rating for a security called Rembrandt. The decision, which S&P has appealed, awarded $30 million to 12 local councils, who argued that they would not have invested in the security had it not been rated AAA.

In America, ratings agencies are held to be merely giving their opinion, and so are generally exempt from most legal liability.

Can the ratings agencies be reformed?

Asked how he would fix the ratings agencies if he could, Moosa says he’d rather he didn’t have to.

“In the extreme, if I had the choice, I’d close them down. I don’t think they serve a purpose.”

Failing that, Moosa would like to see a change in the business model where ratings agencies rely on something like a subscription service by investors for their ratings. “That’s what forecasting agencies and stock analysts do,” he says. “You want their advice, you subscribe.”

Moosa would also require more disclosure, including the methodologies used to give ratings, as well as punishments for when agencies do not live up to rigorous methodologies.

“It’s like discouraging all forms of bad behaviour. You have to punish first to send a message, and then you regulate.”