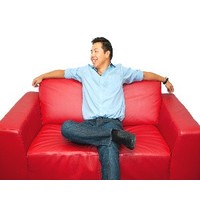 This was a mixed blessing, he tells LeadingCompany. “I realised I didn’t want to be an engineer. So after graduation I felt pretty lost. I was good at maths and sciences, but I wasn’t passionate about it.”

Luckily, Chuck had a mentor – “an engineer who’d done an MBA and became pretty entrepreneurial”.

This mentor helped him realise being an engineer wasn’t the only way to satisfy his love of technology.

Today, Chuck’s job contains as much business strategy and marketing as it does technology. After helping launch Google operations in three different continents after an MBA, he joined eHarmony in 2008 to help set up its Australian operations.

“Growth is an exciting place to be,” he says. “You can be a bit of a pioneer – taking the best practice from a home company, and localising the brand, and the messaging.”

eHarmony, founded in 2000 by American clinical psychologist Neil Clark Warren, relies on its compatibility algorithms to maximise the odds of its singles meeting someone they’re compatible with for the long haul. A privately-held company, IBISWorld has estimated its 2012 revenue to have been $275 million.

Translating this well-oiled algorithm to a new country isn’t as straightforward as it may seem.

What makes couples compatible can change across different cultures. It took eHarmony two years of studying Australian couples before it properly launched its Australian dating service.

Chuck is reluctant to make generalisations about how Australian couples are different, saying every population has many different types of people who value different things in their partners. But he does make some broad comments.

“We found a lot of Australian couples like to have more shared experiences with their partners,” he says. “So they place more value on having shared hobbies and the like.”

“Many other parts of the world don’t care so much about that. Couples in America, for example, prioritise trusting someone in the relationship over having the same interests.”

Many Australians also didn’t respond as well to the marketing that worked a treat in America, which showed how the site could help you get married.

“Talking about marriage as the end destination went down quite well in America, but it was seen as too serious here.”

“We also found there was a bit of a stigma around online dating here, more so than overseas, but that’s come down a bit in the last two years.”

Today, there are 1.5 million Australians on eHarmony, and 11,000 marriages have followed meetings through the site.

“It’s pretty fantastic growth given we only started marketing the site in 2010,” Chuck says. Four in five Australians have now heard of eHarmony, according to company surveys.

But the company can’t rest on its laurels, even in Australia, Chuck says.

“The dating industry is always changing.”

“Our goal is to have people successfully find partners. But of course, if we do that, that leads to them leaving the site. So it’s always important for us to keep checking the pulse of our singles, and what is and isn’t working for them. And that changes over time.”

“We’re just constantly updating our algorithms and trying to stay relevant. And with mobile taking off, that’s providing new challenges as well.”

The Love Doctor: How Jason Chuck gets a harmonious workforce

What’s the one thing a leader should never say or do?

“eHarmony is very similar to Google, in the sense that it’s important for us to hire great people we don’t have to manage. But that doesn’t mean we don’t give them feedback on what is and isn’t working. You can’t avoid the situation.

“Some people don’t like giving constructive or negative feedback – but your team isn’t going to improve without knowing how you want them to.”

“Making sure that, when you spend the time setting your goals, everyone understands why the ship is headed in a certain direction.

“I like to share the numbers within the organisation. I tell everyone what’s happening with revenues, both the top and bottom line, even though it might not have a lot of relevance to say, my PR manager. But it’s important for everyone to understand the different levers and the reasons for things.”

What qualities do you look for in your direct reports?

“I look for people who are self-motivated – who are willing to pick up the ball and run with it without having to be told.

“We’re getting to be a pretty large organisation externally, but we’re still a small team. So people need to be willing to work beyond the boundaries of their job description.

“Being analytical is also important. You don’t have to be a maths wiz, but it’s good to be able to scrap below the surface.”

Correction: An earlier version of this article said that Chuck was crowned ‘engineer showing greatest promise’ by his classmates at university. This was not the case – the award was given by an industry body.