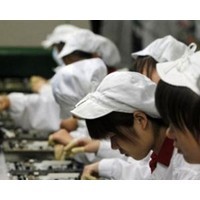 As reported by the International Trade Union Confederation in 2012, branches of the All-China Federation of Trade Unions have been established for Chinese operations of Wal-Mart, Carrefour, Motorola and Samsung.

Since reports of worker suicides in 2009 and 2010, there has been scrutiny of employment practices at Foxconn, which owns three companies manufacturing Apple products. In 2012, the Fair Labor Association (FLA), an independent organisation which monitors labour standards on behalf of over thirty transnational corporations, found multiple violations of labour standards included in the FLA’s Workplace Code of Conduct. One of the actions recommended by the FLA was to conduct more democratic union elections and eliminate management dominance from the union, strengthening workers’ rights to freedom of association.

Under Chinese law, workers are not free to join the union of their choice, and unionisation is heavily regulated by the state. However, under the 2008 Rainbow Plan, the Chinese government has encouraged greater unionisation and collective bargaining, including in transnational corporations operating in China. The atmosphere is therefore more positive for unionisation. The FLA’s 2012 report criticised Foxconn’s practices as contrary to both Chinese and international law. Its recommendations on making Foxconn’s unions more representative encourage the company to follow new, local regulations.

China remains an outsider to most of the international treaties, which guarantee freedom of association and union rights. It has signed the International Covenant on Economic, Social and Cultural Rights, but has declared that the right to form and join unions will be subject to the Chinese constitution and internal law. This reservation could effectively take away what the international treaty gives. China has been criticised within the United Nations for its failure to guarantee free unions, and several complaints against China have been brought to the International Labour Organisation (ILO)’s Freedom of Association Committee.

The FLA’s Workplace Code of Conduct is based on ILO treaties, including those on freedom of association. Since China has not signed these treaties, it is understandable that the FLA grounded its criticism of Foxconn in Chinese as well as international law. This makes the recommendations more acceptable to Foxconn and to Chinese authorities, and therefore more likely to be followed. The recent announcement of democratic union elections demonstrates the success of the FLA’s strategy of blurring the difference between the requirements of Chinese and international law.

Poor labour practices at Foxconn have placed Apple under pressure. NGOs such as China Labor Watch and Students and Scholars against Corporate Misbehaviour publicised allegations of abuse of Foxconn employees, with a focus on Apple, Foxconn’s largest client. This publicity led Apple to appoint the FLA in early 2012 to audit Foxconn.

The FLA approach of linking international and Chinese law in its criticisms shifts the blame from the state to the company. The result, which could be repeated in other Chinese contractors to transnational corporations, is acceptance of stronger freedom of association standards. The method of maintaining commitment to international standards while masking them as internal law is a strategy worth adopting more widely. Even if China refuses to sign human rights treaties protecting freedom of association, a bit of creative thinking can make practical improvements to working conditions and access to union representation possible.

Holly Cullen is a Winthrop Professor, faculty of law at University of Western Australia.