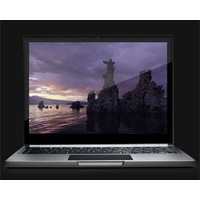 Google has been pushing more of its own branded products lately, and the Chromebook Pixel is the latest in that trend. The company’s first push at creating a high-end laptop, the Chromebook is directly targeted at power users, not just the casual browser.

But is it worth a look? The backlash against Windows 8 means some may be open to alternative operating systems, but asking to invest in a new way of working is a big ask. Is Google up to the task?

The Chromebook Pixel features a 12.85” display, with a resolution of 2560×1700 at 329 PPI. The screen is Gorilla Glass featuring multi-touch, with some other features as an etched-glass touchpad and a backlit keyboard.

Inside the device, the computer is powered by a dual-core 1.8Ghz Intel Core i5 processor, with integrated HD Graphics 4000. The device comes with a 32GB solid state drive, although the LTE version comes with a 64GB hard drive.

Connectivity wise, the laptop comes with two USB 2.0 ports, a mini display port and an SD/MMC card reader. The device also features a five-hour batter, along with Bluetooth 3.0.

Google is clearly trying to make an impact with the Chromebook, with its sleek, aluminium finish. As The Verge points out, however, it’s somewhat different from the company’s first promise the Chrome OS would be used on cheaper devices. As the publication says, “it’s sure as hell not disposable” with a price tag of $US1,299 or $US1,449.

And there’s certainly high praise for the construction.

“The Pixel is the best-designed laptop I’ve ever used. It’s not the flashiest or the most noticeable, necessarily — when it’s closed and off, the matte gray lid certainly won’t catch your eye next to the glowing Apple logo on a MacBook Air.”

“But the Pixel’s smooth, anodized aluminum body and slightly boxy look give the Pixel a refined, handsome, business-y vibe — this is the George Clooney of laptops.”

A little corny, perhaps, but it makes an impression.

Gizmodo also had good things to say about the screen, calling it big and “beautiful”, also praising the lid for its sturdiness.

TechCrunch said the best feature on the outside was the LED bar that lights up when the machine is in, and displays a range of colours when you open it and shut down. “There’s nothing useful about this, but it’s a good example for the thoughtful design that makes the Pixel stand out from its competitors”.

“The Pixel actually features many of these small little features that would definitely appear on a slide at an Apple keynote.”

“The power brick has a little groove that you can run your cable through, makes it a bit easier to keep it halfway organized. The backlight on the keyboard dims when you play a video in full-screen mode.”

Engadget also said the device was sturdy, with a solid build. Although it did say it wished the company had adopted Apple’s idea and used a magnetic hold for its power cable.

The publication also said the screen was good, although would have preferred a wider version: “Otherwise, we have nothing but love for the thing.”

Performance-wise, the laptop seems like a great piece of hardware with 4GB of RAM. Engadget said the device runs very fast, although did notice some stuttering after longer sessions.

“The battery life was impressive as well, lasting about six hours a charge. I also liked the charging cord’s indicator ring which glowed red, yellow, or green according to how much power remained.”

However, at TechCrunch the publication broke down the reality of the device, saying it’s meant as a “premium device for those who already live in the cloud”.

“In its current state – and at its current price – the Pixel is essentially a Nexus-like reference design for what a high-end Chromebook should look like (though Google definitely isn’t positioning it this way).”

The Chromebook is a well-built device. It looks beautiful, and reviewers suggest it’s easy to use. But it’s really only for a specific user. If you’re already doing most of your work in the cloud, then you can probably get a lot of use out of a gadget like the Chromebook. But for most users, this well-built device is simply going to fall short of your needs.