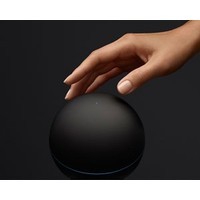 When Google announced its new Nexus tablet at the 2012 I/O Conference, it wasn’t the only thing it showed off. The company unveiled a new type of media streamer called the Nexus Q, designed to be a type of hub for all your Google content.

The response to the Nexus tablet has been overwhelmingly positive, but Google’s last venture into the set-top market didn’t go so well. Can the Nexus Q offer something different in a very crowded space?

The Nexus Q is shaped like a sphere, with 32 different LEDs colouring the middle of the circle, letting you know whether it’s connected to the internet or not.

The device is powered by dual ARM Cortex-A9 CPUs, with 1GB of RAM, 16GB of memory, and comes with a micro HDMI port, an optical audio port, an Ethernet port, WiFi a/n, Bluetooth and Android 4 – Ice Cream Sandwich.

The device itself measures 116mm across, and weighs 923 grams, although reviewers have noted it feels much heavier due to the metal construction.

First up is the feel of the device, and The Verge seems convinced, saying the device both “looks good and feels great”.

It’s important to note here the Q doesn’t have a user interface of its own, but requires another Android device in order to manage your media streaming – it uses its own app.

And unfortunately, as The Verge points out, it’s a “relatively bare bones affair”.

“You can adjust the brightness of the LEDs on any of the Qs you have connected in your home (it’s designed to allow the use of multiple devices in a single location), turn off the various output jacks, or change the visuals that play back when you’re listening to music.

“It’s perfectly functional, but it does feel clunky to be using an app to control such basic settings, especially when under the hood the Nexus Q is running Android 4.0.4 on a dual-core A9 processor.”

All streaming through the Q is initiated through YouTube, Play Music or Play Video on Android. And The Verge says music playback was good, with the device able to access any tunes you have in Google Music.

“The trick here is that it’s not actually streaming from your phone or tablet at all; rather, your device is serving as a glorified remote control, telling Google’s servers to send media down to the Q over the web.”

That’s both good and bad – you’ll need to upload tunes to Google before streaming them.

Over at TechRadar, the publication noted that while streaming music was fine, streaming video was another issue.

“Google ships the Nexus 7 with Transformers: Dark of the Moon and while the movie looked great on the device itself, there were some artefacts visible when we streamed the movie to our 70-inch Sharp Aquos HDTV.”

It also pointed out the device doesn’t work with other streaming services, such as Hulu or Netflix, which is disappointing.

“Of course Google designed the Nexus Q for “hack-ability” so here’s hoping that down the line an update will enable third-party services.”

But as PC Mag points out, the limited media selection is holding the Nexus Q back from being a really great device.

“It’s not a wireless solution, but if you don’t mind tethering your smartphone to your TV, you can stream almost any audio and video content to your HDTV or home theatre through a microHDMI-to-HDMI cable or an HDMI-MHL adapter for as little as $10.”

If for some reason you’re feeling underwhelmed regarding the options available through the Nexus Q, then you’ve hit on one of the main criticisms of the device – its lack of features.

By all accounts, this is a sharply designed streaming device with good usability, but it just doesn’t offer enough. If you’re using all of Google’s main services right now including its Play and Music features, you’ll love the Nexus Q – but it’s doubtful those users are in the majority.

If you want something Google-focused, this may be a good buy, but right now it’s simply too expensive and doesn’t offer enough.