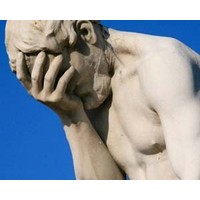 The company’s shares plummeted 9% this morning, or about $US68 per share, after a public relations staff member accidentally filed the company’s earnings report hours earlier than planned – and the news wasn’t very good at all.

Revenue and net income came in below expectations, with profit falling from $US2.73 billion to $US2.18 billion in the third quarter. Ad prices were also revealed to have fallen 15% over the past year.

Motorola, the company Google bought for $US11 billion last year, has also lost another $US500 million.

The report was made even more hilarious by the fact it was an early version, containing gaps in the text – including a large placeholder that said “PENDING LARRY QUOTE”, referencing chief executive Larry Page.

But the company’s problems didn’t stop there. When it kicked off the earnings conference, which was hosted on YouTube, no one could join – because the entire site had crashed.

The fact YouTube – one of the most popular sites in the world with near constant ‘up-time’ – would crash on the day Google suffered one of its worst public relations hiccups in recent history only added to the furore.

Overall, investors weren’t impressed. Although Google controls 75% of the search advertising market, prices have been falling. And there are concerns the company isn’t controlling the mobile ad market enough. The average cost-per-click fell 3% from last quarter.

But the problems don’t stop there. Later in the day, Google published a website announcing a new version of the Chromebook laptop earlier than planned.

Not that it stopped Page from being optimistic.

“At just 14 years old, we cleared our first $US14 billion revenue quarter. I am also really excited about the progress we’re making creating a beautifully simple, intuitive Google experience across all devices.”

But there’s one big question remaining – what should have been put in the report to replace the “PENDING LARRY QUOTE” message? The possibilities are endless.

We have our own thoughts. “Marissa Mayer stole my mug and I want it back”, is one. What do you think?