Home-based staff: A tool-kit for managers 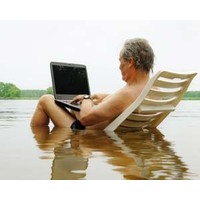 When we’re digitally connected through ever smaller devices to everything we need to do our jobs, do we need to bother going into the office?

For many workers, the answer is ‘no’.

Next week is the federal government’s National Telework Week, which is intended to promote the benefits of allowing workers to work from home.

It’s something many leading companies are embracing in a bid to hold on to the best workers, for whom having a reasonable lifestyle and cutting down on the daily commute are often key concerns. In a 2010 Cisco survey, 69% of employees surveyed said they don’t think they needed to be in an office to be productive, and among current university students, 60% said they believed they should have a right to a flexible schedule.

But can you lead and manage staff who rarely come into the office? You can, but not without structure, say leaders who’ve tried it. Here are their insights into managing home-based staff.

Before you say yes: Not for everyone, not all the time

The important thing to remember with telework is that it doesn’t work for everyone, Chris Luxford, the Asia-Pacific CEO of Aegis, recently told LeadingCompany. Aegis operates call centres, and allows many of its frontline staff to work from home.

“Some of our people look for a lot of social activity at work that they don’t get from home,” he says. “Within two weeks of working from home, they basically told us they were going stir-crazy.

“Others, who were more comfortable working in a solitary environment, well, they loved it.”

What he found intrigued Luxford.

“The profile of the individual is really important.”

Margaret Harrison, the managing director of Our HR Company, suggests businesses don’t allow people to work from home all the time, or all at once.

“The person who’s working from home, they’re always regarded with a sense of jealousy by others,” she says. “People think, ‘Oh, lucky them they got to sleep in today and not be in traffic’.

“But the home-worker is, in my opinion, the one who misses out. They miss socialisation with other workers, building a rapport with others, and learning from their colleagues. There’s a real sense of isolation with working at home.

“I’d suggest people work from home only a few days a week where possible.”

Australian managers have historically been reluctant to allow telework because of a perception that if they aren’t supervised, their workers will just watch TV all day.

Harrison says managers who can’t trust their workforce are likely to find it very difficult to effectively lead home-based workers.

But she thinks that when it comes to professionals, it makes sense to assume most know how to work independently.

“Of course, you do have to consider personality – is the person who wants to telework structured, disciplined, have they shown these attributes before?

“But I think, if you’re looking at a professional person, these people usually have a sense of discipline and the knowledge to get work done on their own.”

Some industries have been judging workers on output for years, and so are uniquely suited to telework.

“There’s a lot of data on performance, not just on output but also on the quality of performance. So from an overall oversight perspective it makes absolutely no difference whether the person is physically on site or whether they’re working from home. We run exactly the same regime for both.”

How to guard against a loss of rapport

At Aegis, Luxford explains, home-based staff come into the office infrequently, but talk to their immediate managers every day.

“We have our people come into the office on an infrequent basis. For some it’s once a week, for others its every couple of weeks. They do that to interact with their managers. They work on what development aspects they want while they’re here.”

One of the reasons employees are sometimes reluctant to approach their organisations to work from home, even when it would work better for them, is because they don’t want to be overlooked for promotion, or considered outside the core team.

Luxford says at Aegis all roles are advertised internally, so home-based workers can be aware of opportunities. He says their team leaders don’t forget about them just because they’re at home. “Their immediate managers talk to them two or three times every single day. Keeping up that communication and regular contact is important. It might be over the phone, but it’s very important.”

A Intel white paper released in October stressed that new technologies would likely change the way managers interact with stay-at-home workers, making dealing with them more similar to how one deals with in-office workers.

But all you really need to work from home these days is a decent internet connection, and a suitable manager.

The best managers are always able to clearly articulate what they want, and to say when what they’re getting isn’t good enough.

But this skill is even more important when dealing with home-based workers, Harrison says. “It’s a very hard thing to train.”

“It needs really special managers who are really trusting of people, and a new style of management – one that’s open and frank, and expects the same from staff members.”

Asked whether the managers of home-based workers had to be tech-savvy, Harrison says most managers already are.

“Really, if we look at it, so much internal office communication is already electronic. We send each other huge documents… what’s the difference with sending work?

“I think the technology is well-known enough, so it’s not as much of an issue anymore.”