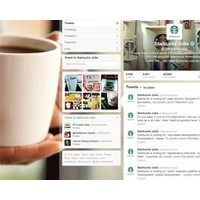 It’s 2009, and Jeremy Langhans, then an employment brand manager at Starbucks, has a problem.

More and more people are applying to work at Starbucks through the coffee chain’s online recruitment systems. And while this is efficient, it doesn’t sit right with him.

“For every thousand who applied, 999 would get a system-generated ‘Thanks but no thanks’ email,” he tells LeadingCompany from Washington.

“That was a very bad thing for Starbucks. After all, these people are our customers.

“If I have a queue of customers willing to pay $4 for a latte, who then spend time getting into our system just to receive a ‘no’ from us due to the sheer volume of applicants and the way the system was set up, are they going to get back in line for their latte?”

Even though the impersonal nature of Starbucks recruiting risked alienating the brands customer base, a personal response to every applicant was out of the question. “We couldn’t call everyone that applied,” Langhans says. “We just don’t have the resources.”

Luckily for Starbucks, another online trend offered a way out of the quagmire. Social media, Langhans decided, would be what Starbucks used to humanise its recruitment processes.

This dramatically changed recruitment at Starbucks. Today, people who apply still do so online, and if they’re unsuccessful, they still get an automated reply. But now they have somewhere to go if they want to understand why and to engage further with the company.

The coffee chain set up social media recruitment channels, separate from its broader consumer accounts, to better engage with jobseekers.

Starbucks recruiters put out their first tweet in October 2009. Their message was simple. It said Starbucks was a great place to work, and if people had any questions, they could respond and the Starbucks Twitter team would get back to them.

Langhans says engagement was slow at first, but over time, the team was blown away by the community response.

“It was all in a public forum,” he says. “People could talk to us, and they could talk to each other. We really created a huge conversation about the brand. That really changed the face of recruitment for us.”

“The main problem people have when they get rejected is there’s no reason,” Langhans says. “It’s a computer-generated message. You can’t reply. Usually, it literally says on these emails ‘do not reply’, and if you do it’s undeliverable. There’s no way to ask questions.