How to halve your Christmas party budget 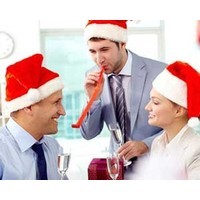 The Christmas party is a key part of most companies’ end-of-year celebrations. Or at least, it used to be. Morgan Stanley cancelled its staff Christmas party this year, The Australian Financial Review has reported. When LeadingCompany contacted the investment bank to ask why, a spokesperson was sensitive to questions, saying the issue was “an internal matter”.

It isn’t hard to guess why companies might be cutting costs (although this may not be Morgan Stanley’s reason). There has been a general tightening of the fiscal belt across the business world, as economic uncertainty reigns.

So, how important are Christmas parties to morale and how much do you really have to spend?

“You need to have a sense of acknowledgement. It’s the perfect opportunity to just say thank you,” he says. “It’s been a busy 12 months, you’ve worked hard, [it’s] time to recognise and reward the team.”

Companies can go overboard with their events, when something much simpler could work better, he says.

“Sometimes it’s just a begrudging ‘Oh we have to do this’ instead of a genuine thank you to staff,” says Magowan. “It’s not the expense that’s key; it’s the thought that’s gone into it – how it’s organised, the intention behind it, the generosity of spirit.”

For companies worrying about their bottom line, Nally says it’s not hard to keep costs low.

“You can get a great set menu, some great food and some drinks. Basically people will go, ‘That’s a really nice gesture’. It doesn’t have to go into the wee small hours of the morning, on the boss’ credit card. If you have this nice mix of recognition, some awards, some good tucker and an end point, most people will say ‘fair cop’.”

There’s nothing to be gained from being cheap, he adds. “You can do yourself a disservice, having a sausage role between two, for example.”

Dr Hilary Armstrong, a psychologist and the director of the education at the Institute of Executive Coaching, says employees need a sense of connection to an organisation and end-of-year celebrations are part of that.

“I think these days people connect with an organisation to get some sort of personal fulfilment, so they put in their effort and one of the ways that an organisation can signal this effort is a Christmas party,” she says. “It’s a ritual of celebration and it’s a signal that we care about you. We really know that if you look after the people, the bottom line looks after itself.”

Nally says although having a good time is important, companies need to be sure people behave responsibly and leaders should take charge, if necessary.

“Communicate to managers and employees to have responsible fun … Give people taxi fares – small cost, big [risk] avoidance – maybe set start and end times. Organisations have to ask at what point does my responsibility for those employees finish?”

“At the end of the day, the last thing you want to do is ruin someone’s Christmas,” Nally says.