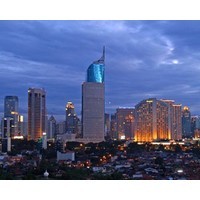 On the streets of Jakarta, Indonesia’s emerging middle class is booming.

The evidence is everywhere. Enormous, shiny malls are sprouting up all across the city. Spotless new cars battle with the traditional swarms of motorcycles on the streets.

It’s thanks to these consumers that Indonesia’s economy is growing at an incredible pace. Indonesia is the second-fastest growing major economy in the world, after China. Since the departure of president Suharto in 1998, gross domestic product (GDP) has grown at an average of 5% yearly. The nation skipped through the GFC with barely a blip.

In the next few years, it will be the biggest market in the world, says Ian Williamson, who recently spoke at a leadership forum in Jakarta. “Indonesia is a critical strategic partner [for Australia] in terms of business, cultural and security issues. The Australian opportunities here are vastly more than are being realised right now,” says Williamson, who is the director of the Asia Pacific Social Impact Leadership Centre at Melbourne Business School.

James Castle, CEO of CastleAsia, an Indonesian CEO networking group, says: “It needs or wants so many things that international business can supply. Here’s a great opportunity and although there’s certainly competition, it’s easier to enter a growing market than a flat market. It’s a very good place to be in terms of access to the domestic market.”

The business community outside Australia has been quick to realise Indonesia’s potential.

“Investments have been at very high levels – it’s well over 30%,” Castle says. “I think this year the official statistic is 35% of GDP. Companies are exploring opportunities here and moving where they find the policies attractive. I wouldn’t wait.”

Australia is only Indonesia’s 10th-biggest trading partner, despite the proximity and size of the market, according to research published in the European Trade Commission.

Castle puts it simply: “If I was a stockholder I would ask my management, why aren’t you doing anything in Indonesia?”

What’s holding us back?

Williamson says a closer relationship between Australian and Indonesian business leaders is critical to strengthening our economic ties.

“I don’t believe there has been enough interaction between the two countries to reinforce that relationship,” he says. “There isn’t a good enough understanding of the needs of both countries. The market is growing and is nowhere near saturated.

“The lack of interaction curtails economic exchange. I believe there is a need for more channels to facilitate economic activity. I think still there are some very basic opportunities of things that can be done,” he says.

Both experts say doing business in Indonesia is very easy. Unlike China, as profiled previously in LeadingCompany, there are no special hurdles.

Castle says it’s just like any other country; you just have to be patient. Like any sustainable market, it is about building up an understanding of the people and culture by spending time there. The initial investment of time and money is essential to finding opportunities and solving problems, such as potential corruption and lack of infrastructure. “It’s a country where the rule of law is weak and institutions are young – [which] are typical problems of developing countries,” he says.

Some sectors, such as mining, are tightly controlled by the government, but many are not. “In the consumer market it’s pretty straight-forward. You can have 100% ownership of most areas. Do your homework and learn the market, but you’d do that anywhere.”

Williamson says there’s one very easy way to get ahead in Indonesia; don’t give in to corruption.

“A firm’s reputation in this market will be very important,” he says. “You have huge value being placed on corruption in Indonesia and those firms that are seen to have placed an emphasis on addressing that, and are honest brokers, will incur benefits.”

While refusing to buy into corruption might put you at a short-term disadvantage, Williamson says the long-term benefits will be worthwhile.

“[Some] private sector firms are engaging in voluntary disclosure,” he says, referring to making full financial statements public. “That incurs a cost and may give competitors a leg up, but it is a reputational asset that is very important for long-term investment in Indonesia. What is the timeframe that you’re planning to invest in Indonesia?”

Participate in the community

A real relationship involves honesty about the issues in Indonesian society, such as poverty, which is in the throes of change. “Many of the economic opportunities over the next decade will result from social changes and attempts by Indonesia to address their social problems,” Williamson says. “So corporations should think about their outreach activities.”

He says these activities are one of the simplest ways to enter a market.

“Think about the challenges that Indonesia is facing,” he says. “These altruistic activities have dual purposes: they help the community and they also inform your leaders about the problems facing the country and the people.”