Inside the online community that makes and breaks websites 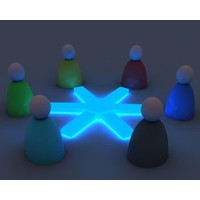 The site, which calls itself the “front page of the internet” is dedicated to user content; users post links to the site and then vote on their favourite links, with the most popular ending up on the front page.

A link that gets to the hallowed turf of that front page can attract tens of millions of clicks. For a website operator, that’s an awfully big carrot and it’s not surprising that many publishers have been accused of “baiting” Reddit with articles to try and increase traffic.

So far, Reddit has resisted such moves and in June the company actually banned links from several media company domains, including those of prominent US publication The Atlantic.

As Matthew Shaer writes in New York Magazine, the message is clear: “Reddit is a community. It will not play your low-minded, traffic-whoring games.”

Shaer profiles the site and its users by attending a meet-up of Reddit users in New York’s Central Park on something called Global Reddit Meetup Day.

The site has 35 million users every month and a staggering 140,000 sub-forums on an incredible range of topics.

“Most [users] are male, and most live in the US. Many work in programming or IT. They are drawn by not only the diversity of the content but also the site’s remarkably unified political ethos, which is left-leaning, with a libertarian tack. Marijuana, atheism, congressional corruption, and web rights are among their many interests.”

The recent growth of the site has been enormous, leaping from 30 million page views a day in January 2011 to 65 million by the end of the year – incredible for a site with just 15 full-time staff.

But as Shaer explains, it’s not your average social media site. It’s a complex world with a philosophy of what its users see as a clear mission.

“Here is what the superego does: Finds bone-marrow donors. Distributes petitions to abolish for-profit prisons. Rages against the Stop Online Piracy Act. (Reddit was instrumental in organising opposition to the bill, which now appears all but dead.) Redditors have donated $50,000 to a kid afflicted with a blood disorder, $200,000 to Doctors Without Borders, and $180,000 to relief efforts in Haiti. They also helped funnel over $600,000 to Karen Klein, the bullied bus monitor from upstate New York.

“Redditors like to refer to their community in lofty, quasi-religious terms. It’s a force for good in a bad world, they say. It punishes the evil and rewards the meek.”

And it’s not a place for faint-hearted web marketers to try and strut their stuff – no matter how attractive the prospect of a traffic hit might be.