Monkeying around at Rio Tinto 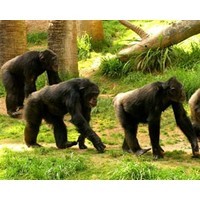 A new leader is appointed at Rio Tinto – Sam Walsh – and within days he is bringing in his own CFO, former Transurban chief Chris Lynch.

We can anticipate a similar scenario at BHP Billiton. Whenever a leader changes at any level, there are ramifications for the followers.

It’s not just a human thing. The political upheaval from a change of leader happens in nature. Take for example chimpanzees – the best comparison species because of their big brain and the complexity of their communities.

From her earliest years studying chimps at Gombe in Tanzania, Dr Jane Goodall observed that males (always male leaders in chimps and always female leaders in bonobos) progress in the hierarchy through coalitions: an adult male trying to make it to the top has a much better chance if he has an ally. And as a male becomes more powerful, he brings his supporters through the ranks with him so that supporters also increase their power. Males supporting another male in their rise through the ranks benefit if the male they are supporting becomes the alpha – their support is reciprocated in the form of access to sexually attractive females, to food and merely being part of the “in group”.

Of course, if an individual supports another who does not succeed in gaining the top job, there are negative consequences in facing the one who did succeed.

The same dynamic is clearly visible in human organisations. Knowing that this has a natural force allows us to make sense and make good decisions for both individuals involved and as leaders.

First, we no longer need to be surprised that a new leader causes a shift in the team dynamics as to who wins and who loses.

Secondly, it means that a new leader could choose not to be too quick to act on their impulses – the old hands might not be against you. They might be ready to make the shift in their allegiances.

Thirdly, it means that if you want to be part of the new regime you will need to take the initiative to demonstrate to the new leader that you are ready to serve.