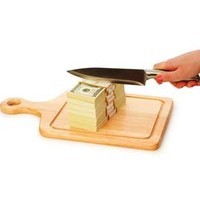 Sure, the company is in dire straits, but PaperlinX’s managers were promised bonuses for top performance in their employment contracts, barring “exceptional circumstances”.

Well, those circumstances have arrived, and days out from being rewarded for their hard work over the past year, acting CEO Dave Allen has written to the paper company’s managers to say, in effect, the company couldn’t afford their bonuses.

According to the email, a leaked copy of which was published on PaperlinX-critic Graham Critchley’s website, the board had decided performance bonuses were “not appropriate” given the $266.7 million loss made by PaperlinX in the 2011-12 financial year.

“Several of our businesses have performed extremely well in the last year and I recognise that not paying the [short-term incentive plan] is especially hard for these businesses. We are, however, also a group and the PaperlinX group losses are considerable.

“I know we can rely on you to continue to strive to improve the performance of your business over coming years, thereby improving the overall company position, which will in turn lead to greater reward for employees as well as shareholders.”

LeadingCompany tried to verify the contents of the email, but PaperlinX didn’t respond before deadline.

Many companies, as part of their turnaround, lay off the least productive members of their workforce. Bonuses may be expensive for PaperlinX right now, but canning them has the effect of penalising PaperlinX’s best performers.

PaperlinX’s leaders are in a very difficult position. The company’s recent history has been far from rosy.

Shareholders tried unsuccessfully to remove chairman Harry Boon in March. Their issue was less Boon himself, and more the CEO he was seen to be protecting, Toby Marchant.

Even though he survived the EGM, Marchant left last July, as did another executive, US operations chief Chris Creighton. Marchant had been in the top job less than two years, and presided over a further fall in PaperlinX’s share price. It’s gone down 98% in the past four years. He was replaced by Allen while the company hired a British headhunter to find a replacement.

On August 22, the company unveiled the previously-mentioned $266.7 million loss.

When it comes to pay cuts, PaperlinX’s directors have in recent months walked the talk. They took a 15% pay cut themselves in April.

But with angry shareholders on one side, and their highest-performing managers on the other, how can PaperlinX’s managers do right?

The issue isn’t just about bonuses. When a business is in trouble, all the things leaders do to keep their best staff engaged and at their peak go out the window. Holidays, training, and job progression all take a back seat to the survival of the business.

Turnaround practitioner Schon Condon, of Condon Associates, says it’s one of the biggest complexities he faces when going into a business.