Peter Capaldi as Dr Who: Leadership lessons from the new Time Lord 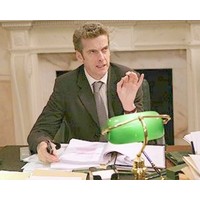 Leadership coach Noel Posus has been up since 4.30am. So have thousands of Australians. This morning, you see, saw the announcement of who would play the 12th Dr Who.

The sci-fi television show has seen 11 actors in the eponymous role, and the newest, Peter Capaldi, is an unexpected choice.

Capaldi is best-known for playing a foul-mouthed, belligerent political operative on British comedy The Thick of It. Needless to say, his reputation doesn’t exactly gel with that of the mild-mannered Time Lord.

His predicament is one not unfamiliar to business leaders. Plenty of leaders have a reputation that, fairly or not, precedes them, and it can be difficult to get their new workplaces to see beyond that.

“That’s the risky thing about leadership. People do make assumptions.”

That’s why a leader’s first few days are critical.

“Leaders do have to be very mindful of that on-boarding period,” Posus says. “They have to ask: ’What does my new environment need me to be?’ If they’re not evolving into their new role, the chances are they’re bringing their history with them, even if it’s not needed.”

People tend to judge a leader based on their previous role, and not on their breadth of experience and achievements. This is no less the case with Capaldi, who Posus says brings far more to the role than his The Thick of It performance.

“He has a very, very long acting history, and multiple awards including an Oscar, that has very little to do with his most recent ‘swearing-up-a-storm’ role,” Posus says.

Nonetheless, because of his past role, as well as because of the rich history of the Dr Who character, his first episodes will be vital in making a new image.

“Peter Capaldi has to make himself exceptionally different than the 11 doctors before him. Otherwise, people will say, ‘too much like so-and-so’.”

Ultimately, Posus says, few people consider what they’ve heard about someone to be more important than what they’ve seen. That means leaders with strong reputations can temper and change that reputation to be what they want it to be in their early months in a role.

After all, it’s what every Dr Who has done.

For leaders, this is a hopeful insight. People can and do change their mind about you based on your actions, and their early experiences of you.