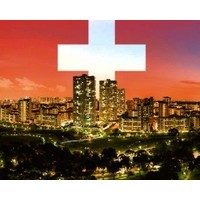 Switzerland. The home of good cheese and better chocolate, accurate watches, and, for as long as anyone can remember, the place the wealthy parked their money, with no one asking where it came from.

But with the rise of Asia and with a new cohort of Rich Listers, that’s all changing, according to a report released last week by private banking research group WealthInsight.

The Family Office briefing is a yearly report the research group produces looking at where the world’s most exclusive wealth management firms, who control $US19.3 trillion, are putting their money. In 2011, the report said, Switzerland had 34% of that pie, but that share is shrinking.

Singapore is one of the main beneficiaries. In 2000, the city-state had just $50 billion of the money of the world’s top wealth managers. In 2011, the figure was $550 billion, and WealthInsight expects it will continue to grow.

For Australians, this perhaps isn’t so surprising. Rich Listers have been moving to Singapore for years. It makes sense their money would follow them. Mining speculator Nathan Tinkler moved to Singapore last year. He joined Facebook co-founder Eduardo Saverin, and the 17% of Singapore’s population that have a net worth over $1 million (the highest rate in the world).

Saverin said his move wasn’t about tax. Nathan Tinkler’s PR guy said something similar. But as this SmartCompany story said at the time, that’s all a bit rich.

Singapore’s income tax rate is capped at 20% for those earning income over $250,000. Corporate tax is capped at 17%. There’s no capital gains tax, no estate (‘death’) taxes for passing on wealth to the next generation, and that’s before you count all the tax incentives given to ‘angel investors’ and the like.  Switzerland, on the other hand, will raise taxes on foreigners from 2016.

Rich Listers usually have to live most of the year somewhere to be able to claim they should be taxed under its laws. For many of the world’s rising billionaires, Singapore is simply closer to home.

It’s a nice place too, the millionaires said when the Economist Intelligence Unit asked them last year where they liked to be when abroad. It was the most popular destination in Asia, chosen by almost a third (31%) of the millionaires surveyed, eclipsing Hong Kong, which was chosen by 24%.

In February, the Hurun Report, a Chinese luxury magazine started by ex-Forbes researcher Rupert Hoogewerf, wrote that of the world’s 1453 billionaires, 608 of them were Asia. Only 324 were from Europe, while America can boast 440.

Proximity with Singapore is a bonus for Australia’s Rich Listers too. With a few exceptions like Swiss-based Ivan Glasenberg, our 32 billionaires travel more to Asia than they do to Europe.

Switzerland’s reputation as a safe place to park your money can’t have been helped by the spate of arrests by US authorities of those who use it for tax evasion.

A few years back, Swiss financial adviser Beda Singenberger accidentally mailed a list of US clients he’d helped avoid their taxes to someone who passed the list onto US authorities. Those authorities now seem to be systematically going after the people on the list one by one.

And from 2009, fearing lawsuits, Swiss banks began agreeing to open their books to authorities investigating laundering and tax evasion, eroding their reputation for privacy.

Coupled with recent crackdowns in places like Luxembourg and the Caribbean, this all makes Singapore look even more attractive as a home for the wealthy and their millions. This must make the money-movers in Zurich very nervous.