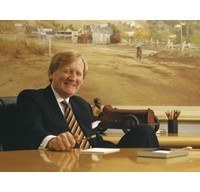 Since starting his business career as a backyard chemical maker more than 50 years ago, Walker has amassed a personal fortune of $800 million, according to BRW magazine’s Rich List.

Walker: “I’m not prepared to discuss my own personal finances with anybody. Why should I? It’s my private business.”

Walker: “I don’t really care what BRW says (I’m worth). When the magazine comes out, I don’t say anything. I don’t even read it. But I think BRW do a lot of research as to what business people are doing or not doing.”

Walker also counters persistent speculation that a syndicate led by him wants to wants buy The Age newspaper.

“I don’t want it now; I’m getting too old to own The Age,” the 73-year-old says, despite the continuing rumors. “Time has passed me by. And they [the Fairfax Media board] would want too much money for it. You would have to join it with 3AW (already owned by Fairfax) to make it work in this digital age.”

Walker says he and his then partners Lloyd Williams and Sir Rod Carnegie, as part of property development group Hudson Conway, offered to buy The Age more than two decades when Fairfax was in receivership. “But the receiver wanted too much money for it so we walked away,” he says.

Today, Walker says the Fairfax Media “rivers of gold” aren’t there anymore to tempt him.

“I don’t have the years left to turn it around and make it profitable,” he says. “But I’m sure there’s plenty of other people capable of regaining revenue in terms of advertising.

“I have other interests,” he says, referring mostly to property development. In a wide-ranging discussion with LeadingCompany, Walker reveals the secrets to his success.

Along with partner Ashley Williams (no relation to Lloyd Williams), Walker owns Evolve Development, a Melbourne-based company with about 8000 blocks of land and a $1 billion book of apartment construction.

Walker says a secret to his business success has been forming good partnerships. He describes Lloyd Williams as a brilliant strategist, who brought built-in experience and “rat cunning” to a partnership that lasted more than two decades until 1999.