Why Australia’s executive assistants are getting more valuable, and harder to keep 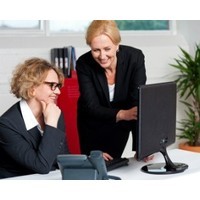 Executive assistants are the best-kept secret of effective business leaders.

They act as gatekeepers and problem-solvers. They greet the guests and field the complaints. Usually, they work the same long hours as the CEO.

And increasingly, if they’re unappreciated or overworked, they’re jumping ship.

Sarah Riley is the director of Page Personnel, a subsidiary of recruitment firm Michael Page International that deals entirely with office support staff.

She says she’s been getting more and more business from SMEs, who land in big trouble when they lose an office manager, executive or personal assistant.

“If a corporate loses an executive assistant, others can often absorb that workload,” she tells SmartCompany. “But if a small business loses someone they rely on like that, they’re in much bigger trouble.

“It’s been an exceptionally busy year for us in the SME market.”

Page Personnel has released a survey of employers, which found 56% expect to see some turnover in their office support function over the next 12 months. The top reasons businesses expected their EAs to jump ship was for a better work-life balance, and to broaden their professional experience.

If it pans out, such a high rate of turnover would be disastrous for many small businesses. As functions like typing and diary management have become simpler thanks to advances in technology, the role of executive and personal assistants has changed dramatically, becoming more strategic than it ever was before.

Louise Zambello, an executive assistant at corporate governance consultancy Thoughtpost Governance, says the role requires good people skills as well as the ability to think ‘outside the box’.

“Say your manager comes to you and says, ‘I need you to do this’. It’s no use asking ‘how’. You need to come up with solutions,” she tells SmartCompany. “When problems arise, you need to work them out.

“A pure EA role can lead to managing people and running an office. With me, in my current role, I manage staff, but I also do a lot of project management.

“We’re becoming the right-hand person – the one to go to.”

It wasn’t always like this, Zambello says. She’s worked in office support and executive assistant roles almost continually since the 1970s, and says the role is unrecognisable from when she started.

“When I started, you were a kind of servant, or a maid,” she says. “I took a break from the workforce to have my children, and when I returned, I noticed a huge shift. We were being given so many more responsibilities, and we were so valuable.

“A good PA can help with an executive’s personal branding and with that manager’s career. They’re the power behind the throne in many ways, and if you have the wrong person, they can really destabilise you.”

There is a perception that anyone can be an executive assistant. And at the low end of the market, Zambello acknowledges, it can feel like that. But at the higher end, executive assistants have fascinating, exciting careers, and are highly rewarded for the value they add.

“At the top end of the market the remuneration is fabulous and the work is interesting,” she says. “You can tailor your role to make it as fun and interesting as you like and take on more tasks as you grow in the job. There’s an abundance of work out there so if you were so inclined, you could PA yourself around the world and be paid for the pleasure of it all.”

Executive assistants are increasingly being courted by organisations that recognise their role as decision-makers in business.

For example, October will see the launch of Office*, a trade show for PAs, EAs and office managers in Sydney. Page Personnel is also ramping up its efforts in this area, having launched their EA of the Year awards for the third year running.

When Office* recently interviewed 100 EAs and PAs, 93% said they felt highly valued by their organisations.

Many of the respondents described the lovely things their bosses did to show their appreciation: things like having flowers delivered for no reason, being taken out for lunch or dinner, being given the keys to their boss’s beach house for the weekend.

But that generational shift is still coming through, and not all organisations properly recognise the vital role that their office and personal assistants play, Riley says.

Her business regularly talks to assistants looking for new opportunities. She says job burnout is a key factor.

“There’s this expectation that the EA works almost to the same degree as the executive they support. Most are on-call 24/7. It’s not uncommon for us to hear about executive assistants being called at 3am to change a booking because the executive is overseas and needs it done, or because the executive has gotten lost and can’t find their restaurant. They become in many ways an extension of the director.

“Another of the key reasons people look to leave is because their salary has been stable for two to three years.

“But the key thing is if they’re not connecting with their manager. If their work isn’t being recognised or rewarded, they come to us and say, ‘I don’t want to do this anymore; I want a structured environment’.”

These days, Zambello does a lot of work from home. But, she says, when she was working 60-hour weeks in the city, she used to see more of her boss than she saw of her partner.

“After a while, you know each other so well you only have to look at each other’s faces to know exactly what the other is thinking,” she says.

“My advice to managers is to interview to get the right person for them. And once you have an executive assistant who you’re really happy with, it’s important to reward them.

“I don’t just mean financially. I’m talking praise for a job well done. One of the nice things about the fellow I work for is that he says nice things about me to clients. He takes me out to lunch every now and then. It’s a nice gesture. I’ve had flowers delivered to my office out of the blue. And he includes me in decision-making – because I’m on the ground more than he is.

“When you feel appreciated, you work your hardest.”