The upside of anger: why workers should express their emotions 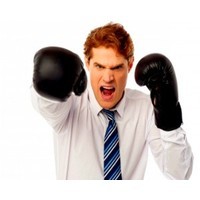 Anger has traditionally been considered an emotion to be avoided at work as it is often linked to a lack of personal control. Anger at work is often seen as unprofessional; an uncontrolled response linked to tantrums and illogical behaviour. As a result, organisational norms have tended to support the elimination of anger at work.

However, with changing views on the importance of understanding emotions at work, expecting workers to minimise their anger in the office may be a missed opportunity to understand what is happening in workplaces.

It is human nature to avoid unpleasant situations and seek pleasant ones; managers are just as prone to this tendency as the rest of us. But in doing so, they are often missing opportunities to understand what is happening within their organisations.

If you ask most managers for a list of desirable employee attributes, they will include abilities that require emotional skills (we are – whether we like it or not – emotional beings), such as the ability to work with others, empathy, enthusiasm and passion.

Not so positive psychology

In taking up this message, it seems that many organisations have been captured by the mantra of ‘positive psychology’. Some organisations and managers seem to support a somewhat dated (but very popular) song by Johnny Mercer from the 1940s: “You’ve got to accentuate the positive/Eliminate the negative/Latch on to the affirmative/Don’t mess with Mister In-Between.”

Generally speaking, anger emerges as a response to a perceived injustice. The word perceived is important here as perceptions for individuals can be strong and powerful determinants of behaviour. So anger is about justice perceptions.

In organisations, justice is an interesting phenomenon. Research by psychologist Jerald Greenberg shows that perceptions of justice (or injustice) can result in lower work satisfaction and performance, insomnia, poor health outcomes for employees, and higher levels of antisocial behaviour at work. This sounds to me like something managers should be concerned about and, if taking notice of and understanding anger is a means of managers doing this, then it is time well spent.

But anger is not a simple phenomenon. If we think about the types of anger at work, most people would focus on one type: the outward expressions of anger towards others. But anger can vary in intensity, from mild frustration (the most common emotion in organisations) to full-blown rage.

This is not to say that I am in favour of angry workplaces. I am not condoning inappropriate expressions of anger at work, but I do defend the right of employees and employers to get angry. Anger can be a motivating emotion: it has sustained whistle-blowers, provided entrepreneurs with the fortitude to resolve problems, and resulted in change in society.

Now I’ve got your attention

Anger is an emotion that gets attention. Indeed, marketers have done research into customer complaint and negotiation processes and found that angry customers are more likely to have their issues addressed when compared with sad customers. When expressed in the right way, calmly telling someone you are angry will achieve far more than telling someone you are disappointed. Anger draws attention to the seriousness of a situation and in a customer service setting this gets the attention of the service provider. Anger does have utility in modern workplaces.

Understanding and resolving anger should be a key tool in most managers’ toolkits. Peter Finch’s memorable scene — “I’m as mad as hell and I am not going to take it any more” — might be something that managers need to explore when employees say it in the future.