Three more years for Stevens at the RBA makes sense 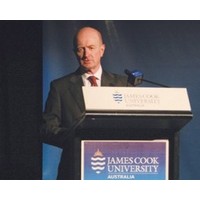 So, Capt’ Glenn Stevens has been reappointed to head the Reserve Bank of Australia for another three years. The reappointment has been universally praised and, after 22 years without a recession, there is not much one can say to criticise is there?

Stevens is a career RBA economist and has held just about every senior position in the bank over time. His career really got serious with his appointment to assistant governor (economic) in 1996 and then as deputy governor in December 2001 under Ian Macfarlane.

It is this period of Stevens’ career that can perhaps draw a sceptical eye in retrospect. The 1996 to 2003 period in Australian economic history was marked by one phenomenon above all others: the rise of private debt.

It was a golden era for the Australian economy. Productivity growth was strong and enabled  incomes to rise without causing inflation and a low Australian dollar drove exceptional growth in export industries across the economy that, in part, enabled Australia to sail through the Asian financial crisis and the US dot-com bust unscathed.

But as Stevens’ current deputy Phil Lowe has argued, such conditions do not always warrant low interest rates. If a low inflationary environment is the result of a productivity shock, it is not always wise to drop interest rates because it may be that doing so will cause asset bubbles?—?which is precisely what happened to Australian housing over the 1996 to 2003 period.

The RBA did ultimately seek to correct its error by bursting the bubble in 2003, which was no small achievement given the debates of the time were driven by the policies and utterances of “easy” Alan Greenspan. Through no great planning of its own, the RBA escaped the consequences of the bust as the mining boom unexpectedly arrived, bailing out the housing and consumption boom.

It can be rightly argued Stevens was not in control of the period so he can claim limited liability. Some have argued Macfarlane was very much responsible and have questioned his political independence in the period. There is evidence to suggest Macfarlane did run monetary policy at the upper end of the 2-3% inflationary band, for whatever reason.

And that is where we come to Stevens’ great strength. By the time he inherited the top job in 2006, 10 years of firm inflation was baked into consumer expectation. As the mining boom took off, so did the economic party. Stevens showed a determined, some might say old fashioned, drive to take away the punch bowl. The bank started behind the curve but hiked hard into 2007.

It rightly ignored criticism from all quarters in doing so, hiked during an election campaign, and was winning the battle before the GFC struck in late 2008.

In the post-GFC environment, Stevens continued his hawkishness. As Australia’s terms of trade rebounded in 2009 and the mining boom resumed, the Stevens RBS was quick to begin normalising interest rates. It also choked off a second coming of Australia’s irrepressible housing bubble that had been fired up by fabulously generous fiscal policies.

In short, the RBA has sought to turn Dutch Disease into a virtue. It may prove to be wrong. There are already signs the RBA has overdone it, with the dollar refusing to fall with commodity prices in part because the central bank has been so insistent that it stay high.

Another of Stevens’ strengths was evident at this point. As the Labor government flailed about with the politics of recovery, eventually blowing itself up in the RSPT debacle, the RBA chief led the nation’s understanding of its new normal. He kept a cool head and offered a strong and understandable narrative for the nation about the need to prevent further debt accumulation in households, the need to reform the financial sector and the need to free up resources for the mining boom in what became known as the “structural adjustment”.

From the perspective of its mandate to modulate inflation, Stevens’ RBA has absorbed a global financial crisis and 150 year mining boom. No small achievement.

However, as is the case in the human condition, great strength is usually matched with its opposite vulnerability, a failure to countenance weakness. This is where we come the second question over Stevens’ tenure at the RBA. Under Stevens, the central bank has produced the most singularly bullish forecasts for Chinese growth and the impact of commodity prices of any institution in the world (with perhaps the exception of the Australian Treasury and the Bureau of Resources and Energy Economics).

To date, they have been more right than wrong. But the economic strategy of “structural adjustment”, using high interest rates and a consequent high dollar to crush non-mining tradeable sectors so mining can grow at super-fast rates without causing inflation, has a downside. If the mining boom proves to be so successful that it causes the prices of bulk commodities to fall, then we will have “hollowed out” our other tradeable sectors?—?manufacturing, tourism, education and rural goods?—?only to find ourselves with some very overpriced and underperforming holes in the ground.

Again, Stevens could rightly argue monetary policy can do little to combat Dutch Disease. Most remedies are fiscal. But the ongoing currency war has opened up a quite conservative space?—?supported by the International Monetary Fund, Ben Bernanke and others?—?where measures to address the capital flows that cause overvalued currency can be addressed. Tobin taxes are now acceptable as are macroprudential tools or even printing money for foreign central banks.

The Stevens RBA has refused to publically countenance any of these and if its forecasts for endless Chinese growth prove incorrect, as is increasingly being debated, it will be culpable and Stevens will be guilty of having waged a backwards looking war.

The next three years will determine if his greatest call will also be his undoing.