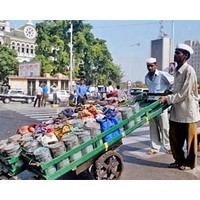 Mumbai’s dabbawalas, who deliver meals prepared in customers’ homes to their offices and then return the empty dabbas (metal lunchboxes) the same day, have an astounding service record. Every working day they transport more than 130,000 lunchboxes throughout the city. That entails conducting upward of 260,000 transactions in six hours each day, six days a week. Mistakes are extremely rare. Amazingly, the dabbawalas – semiliterate workers who largely manage themselves – have achieved that level of performance at very low cost, in an eco-friendly way, without the use of any information technology system or even mobile phones. Their success is proof that with the right system in place, ordinary workers can achieve extraordinary results.

The dabbawalas have an overall system whose basic pillars – organisation, management, process and culture – are perfectly aligned and mutually reinforcing. In the corporate world, it’s uncommon for managers to strive for that kind of synergy. While most, if not all, pay attention to some of the pillars, only a minority address all four. To understand how to accomplish that, let’s explore the ways in which each of the dabbawalas’ pillars contributes to a system that is focused on achieving one simple goal: on-time delivery.

On any given day, a dabba changes hands several times. In the morning a worker picks it up from the customer’s home and takes it (along with other dabbas) to the nearest train station, where it is sorted according to its destination. It is then taken by train to the station closest to its destination. There it is sorted again and assigned to another worker, who delivers it to the right office before lunchtime. In the afternoon the process runs in reverse.

To perform their work most efficiently, the dabbawalas have organised themselves into roughly 200 units of about 25 people each. These small groups have local autonomy. Such a flat organisational structure is perfectly suited to providing a low-cost delivery service.

The railway system’s daily schedule determines when certain tasks need to be done and the amount of time allowed for each. It also helps synchronise everyone and imposes discipline. If a worker is late dropping off his dabbas at a station, his delinquency is immediately obvious to everyone, and alternative arrangements then have to be made for transporting his dabbas on another train. Problems can’t be swept under the rug and must be dealt with promptly.

The dabbawalas essentially manage themselves. This helps them operate efficiently and keep costs low and the quality of service high. Additionally, each dabbawala is responsible for negotiating prices with his own customers, although governing committees set guidelines for prices.

When someone wants to join a local dabbawala group, the group will assess whether there’s enough demand to add another person. New hires are trained by the group to assist in all activities. After a probation period of six months, they can buy into the business with a sum equal to 10 times their expected monthly income, making them equity partners and entitling them to share in the profits.

For the dabbawalas, having the right process in place means more than simply implementing efficient work flows. It also entails just about everything in the organisation, including the way information is managed and a strict adherence to standards.

To convey information, the dabbawalas rely on a system of very basic symbols. Markings on the lid of a dabba indicate the neighbourhood, office building and floor number where the dabba must be delivered; the dabbawala who will make the delivery; and the station of origin. Customers supply small bags for carrying their dabbas, and the variation in the bags’ shapes and colours helps workers remember which dabba belongs to which customer.

This coding system contains just enough information for people to know where to deliver the dabbas, but it doesn’t allow for full addresses. The dabbawalas, who run the same route for years, don’t need all those details, and inserting them would clutter the lid, slow the sorting process and possibly lead to errors.

This insight is applicable in many other contexts. People operate in a visual world. Less is often more because it can reduce confusion. Recognising this, Delta Air Lines recently redesigned its boarding passes to make them less cluttered.

Rigorous adherence to processes and standards

This minimises variations that might throw a wrench into the works. The dabbas, for instance, are all roughly the same size and cylindrical shape. Unusual containers that interfere with the delivery operation are simply not accepted. This uniformity allows the dabbas to be packed quickly onto crates, which are also a standard size so that they can be efficiently loaded onto trains.

The dabbawalas strictly observe certain rules. For instance, they don’t eat until they have completed all their deliveries. Workers are fined or fired for repeated mistakes and negligence. Customers are also expected to abide by the process. Those who are repeatedly late in having their dabbas ready for pickup and don’t respond to warnings are dropped.

Culture: A strong sense of belonging

Dabbawalas tend to remain in their groups for their entire working lives. As a result members of each team care deeply for one another. In one group that I observed, an elderly worker who was no longer able to carry large loads of dabbas helped in other ways and was paid the same salary as everybody else. While on the job, the dabbawalas wear the same style of clothes and white Gandhi caps, making them easy to identify. And they are largely uneducated: only 15% have attended junior high school.

Undoubtedly, their strong ties contribute to the dabbawalas’ extraordinary track record, but the dabbawalas’ homogeneity also plays a part. In an era when many companies strive for diversity in their workforce, its downside – less alignment – often is ignored.

Of course, corporations typically have much more heterogeneous workforces. But they can learn from the dabbawalas’ devotion to their simple mission: delivering food on time, every time. In addition to unifying the workforce, a straightforward mission can be connected to concrete goals that workers can be measured against on a daily basis, making it much more powerful than abstract, lofty objectives like “spread excellence everywhere”.

When confronted with disappointing results, many companies mistakenly think the remedy is to conduct a purge of employees and recruit some stars. The dabbawalas have shown that with the right system, an organisation doesn’t need extraordinary talent to achieve extraordinary performance. Leaders who see themselves as system architects can obtain the same results.

The dabbawalas are facing challenges as their market undergoes a transformation. But with judicious adjustments to their four pillars, they may continue to achieve amazing results. And that’s a lesson managers of all enterprises should take to heart.

Stefan Thomke is a professor of business administration at Harvard Business School.