Why Google has just bought a smoke alarm company for $3.2 billion 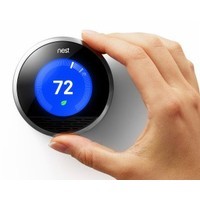 This morning Google announced its purchase of Nest, a company which produces smoke alarms and thermostats, for a whopping $US3.2 billion ($3.5 billion).

Nest only launched in 2011, with the aim of reinventing unloved but important devices in the home.

Its products include the internet-connected Nest Learning Thermostat and the Protect (Smoke + CO Alarm).

Larry Page, chief executive of Google, said in a statement that Nest was “already delivering amazing products” and pointed towards a move into internet-connected home products for Google.

“We are excited to bring great experiences to more homes in more countries and fulfil their dreams,” Page said.

Telsyte managing director Foad Fadaghi told SmartCompany Google will be able to use its scale to grow the acquisition.

“I think the whole home automation and connected home space has a lot of possibilities in the next 10 years, it presents a good growth opportunity for Google to move out of software and into home devices and the services that surround them,” he says.

“Smoke detectors and thermostats don’t represent the entire range of opportunities in that space.”

One of the major attractions for Google is Nest’s founders, Tony Fadell and Matt Rogers.

Fadell is a former Apple employee who is credited with being the brains behind the iPod in 2010 and Fadaghi says he is attractive to Google as a “repeat entrepreneur”.

Nest will continue to operate under the leadership of Fadell and with its own distinct brand identity.

Fadell said in a statement he was “thrilled” to join Google.

“With their support, Nest will be even better placed to build simple, thoughtful devices that make life easier at home, and that have a positive impact on the world.”

In a blog post published on Nest’s website, Fadell said he believes Google has the “business resources, global scale and platform” to accelerate Nest’s growth “across hardware, software and services for the home globally”.

“This decision wasn’t made on a whim – Google has been in the mix in some way or another for about three years of our almost four-year history,” he said.

“In fact, my first meeting with Google as a Nester was before we’d launched. At the 2011 TED Conference, Erik Charlton and I huddled in a corner with Sergey Brin to show him a video and an early model of the Nest Learning Thermostat – he instantly got what we were doing and so did the rest of the Google team when we showed them.”

In May 2011, Google Ventures led Nest’s Series B round of financing, and in 2012 the Series C round.

“Time and time again, Googlers have shown themselves to be incredibly like-minded, supportive and as big of dreamers as we are,” Fadell said.

“I know that joining Google will be an easy transition because we’re partnering with a company that gets what we do and who we are at Nest – and wants us to stay that way.”

Earlier this month, Nest was valued at $2 billion when it was looking to raise $150 million in funding.

The purchase is subject to customary closing conditions, including the receipt of regulatory approvals in the US.

It is expected to close in the next few months.