Why recruiters can no longer send in the clones 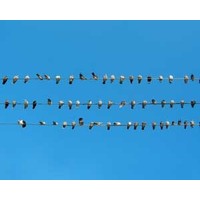 It’s natural to be attracted to the familiar when hiring new talent. A cognitive bias towards the familiar means a subconscious comfort is felt in the company of people who are like ourselves – they may have had a similar education or have experienced a similar career path, says Judith MacCormick, post-doctoral research fellow at the Australian School of Business. While recruiting for diversity makes sense, people are attracted to recruiting others on their wavelength because they know what to expect.

“There is a recognised familiarity bias in recruitment,” MacCormick notes. “But this presents a problem, particularly in the current climate of change.” Pursuing diversity tends to deliver more innovation, creativity and different ideas and, as a consequence, more new and valuable concepts.

“For instance, when asked to think of uses for a paper clip, individuals’ ideas most likely will be specific to their personal experiences,” MacCormick says. “However, when a few people are brought together, the possibilities increase exponentially – because suddenly other people introduce ideas you have never contemplated before. The more the other people are similar to you, the less likely their ideas will differ from yours.”

“Group think” is the real danger in hiring the same people, according to MacCormick. “Everyone starts thinking the same way and nobody challenges others because you all think you know what everyone else thinks.”

Innovation is vital in today’s rapidly changing business environment and many organisations will need to diversify their talent to survive and prosper, MacCormick points out.

But Stephanie Christopher, national director of talent measurement provider SHL, suggests it may no longer be a matter of choice. “Businesses in rapidly growing industries are currently being forced to accept diversity simply due to a lack of available talent,” she says.

“Look at the resources industry in Western Australia right now. They are hiring for such a large number of roles that they have to look outside the industry. Diversity is being forced on them, and in the end I’m sure that will be a very good thing.”

The global financial crisis triggered enormous changes in the recruitment sector and it has shaped the landscape ever since, says Gina McLellan, managing director Asia of Talent2.

“All of a sudden there were forces on most businesses and sectors that no one had ever seen before,” McLellan observes. “There was only so much employees and employers could do as the market forces played out. There was definitely a rise to the top of people who had creative flexibility, the ability to deal with change, to take a situation they’d not experienced before and do something with it.”

In the Asian region, organisations are not always comfortable with the concept of diversity, McLellan reports. “It becomes challenging in Asia where the candidate pool has been so specialist-oriented for so long,” she says.

The prevalence of compliance work in Singapore, Hong Kong and China has resulted in generations of compliant thinking.

“Even from an educational perspective, universities have been focused on producing technical experts. What we found is that technical experts find it very difficult to think on their feet in a crisis. They find it problematic to manage people through the issue and to come up with alternative solutions, partly because they are so used to devising the correct answer.”

Not having the right answer all the time can be a major problem for some managers and staff.

“Compliance thinking comes from a collectivist value system where the group matters more than the individual.

“In many Asian markets individuals have been trained to subvert their own difference to the values of the group. That will naturally make organisations want people who fit. But at the same time, Japan and China have been able to make things happen in extraordinary ways. It was the Japanese system that said we have to listen to those on the floor and utilise their ideas.”

Carmaker Toyota provides a standout example, MacCormick says. “While it is collectivist around a higher vision, a collectivist mentality to make their company the best, they are still allowing staff to act as individuals for the benefit of that group.”

In recent years, there’s been a significant change in what is demanded of the Australian recruitment market, insists Christopher. Leading organisations used to only ask for the top graduates from the right schools and universities, but there’s been a shift in focus to candidates’ behavioural profiles. Organisations are seeking the right fit for their immediate needs and are on the alert for what may be lacking in a candidate’s behavioural capabilities.

“It comes down to the question: what really is the right fit?” Christopher says. “It’s no longer a profile of someone who went to this school and this university … It’s more about the [employer’s] behavioural preferences. And, there may be a range of behaviours that are appropriate for a particular role.”

The recruiter and the organisation now must define very clearly not just an individual role with one job description, but which roles are most important to the organisation to get the job done. The key roles that create success and the career paths through the organisation must also be defined, Christopher notes. Questions must be asked, such as: “Where do those pathways begin? Where do people enter the organisation?”

Many businesses audit the talent already on board, and with a snapshot of the current talent pool and its capabilities, work out what’s needed. Audits can provide a clearer frame of reference for what’s missing and what needs to happen on the recruitment front to fill roles and to achieve diversity.

SHL helps employers diversify their workforces. The first step is definition – understanding what the organisation could look like or what it wants to look like, says Christopher.

“That helps us define what an organisation needs in a role and what are the important areas and talents within the organisation,” she says. If required, a snapshot of existing talent is created through an audit.

What’s so good about diversity?

The business world has experienced “a commoditisation of most things including knowledge”, which has driven down costs and made replication easier.

“The only way companies can compete is to think of ways to start doing it differently,” MacCormick says.

“That difference doesn’t have to be a major, earth-shattering difference. If we want to achieve better margins then we need diversity. The volatility of the economic environment has a paradoxical impact – people like to go with things that are more secure in some ways, such as brands and businesses that they know, but at the same time many of those things are so easily replaced that they can’t help but try out another option.”

Well-managed diversity, and the resulting innovation and engagement, has become essential for many industries, MacCormick says. Diversity carries with it special issues making its management extremely important.

For instance, bringing together people with different experiences, backgrounds and value positions tends to generate greater conflict. Another issue surrounds fear of change, which is natural and will be felt by some people – particularly those not influencing the change. This must be managed to ensure energies are focused on the opportunities presented by change.

“They are always looking for constant change. But a balance of creative people and specialists can be company nirvana. A good manager will try to develop a little of each other’s skill sets in their staff. The flow-on effect of a diverse, flexible group is that staff pick up the traits of others. The flexible ones become a little more detail-oriented when they are working with the specialists, for instance.”

McLellan says diversity is the key to innovation because if you have all innovators and no implementers then you’ll never see that vision come to life, and vice versa.

“Having lived and worked in Singapore for a period of time I have seen the result of a good, diverse mix,” she says. “It is a fascinating country in that the former prime minister Lee Kuan Yew is one of the most creative thinkers of our era. He has crafted Singapore with the most incredible vision. But the construct that has enabled that vision to be implemented is one based on the compliance of a country.”