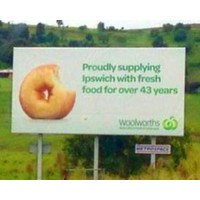 Supermarket giant Woolworths is well known for its jingle “Woolworths the fresh food people”, but the line recently became the crux of a social media scandal.

On Monday a social media storm erupted as consumers took to Facebook to express their outrage over a Woolworths’ billboard erected on the Warrego Highway near Ipswich which labelled doughnuts as “fresh food”.

The complaints started when Facebook user and Ipswich doctor Jason Maloo posted a photo of the billboard and commented on celebrity chef Jamie Oliver’s Facebook wall.

Since the photo and comments were posted on Sunday night, the photo has been liked 13,820 times, shared 11,571 times and has attracted 1,819 comments.

However, the supermarket worked quickly – Woolworths announced on Monday afternoon the billboard would be removed, in response to the Facebook onslaught.

The company started replying to users’ comments on Facebook with the following statement:

“Just letting you know that we are taking the billboard down as soon as we can. Our intention was to show one of the products that we bake fresh every day at our in store bakeries, but we appreciate that the image may have been confusing.”

The response is a far cry from the social media interactions of other companies, many of which tend to ignore problems until they boil over and cause extensive brand damage.

Social media expert and founder of Dialogue Consulting, Hugh Stephens, spoke about Woolworths’ approach to social media and shared his advice on how you can learn from the supermarket to avoid a disaster of your own:

Stephens says Woolworths’ main strength was its quick response to the imminent disaster.

“Woolworths responded at an early stage and went through the process of getting the billboard taken down, something which certainly reduced the bad press,” he says.

“This is a very good example of social media now being able to create a sense of transparency. Consumers are holding companies accountable and we didn’t have this before, it’s a good testament to the tool.”

Stephens says it’s crucial for brands to listen to their customers in order to respond to their comments and mitigate any potential catastrophes.

“A lot of brands don’t listen, so they don’t know what’s going on. Companies need to listen carefully to the consumers and try and work out what the basic primary emotion is and if there is an undercurrent,” he says.

Stephens says, in this situation, Woolworths could have gone further and realised part of the issue sprung from Ipswich’s obesity problem and introduced a measure to counteract the poorly received advertisement.

“Companies must look at what is going on under the surface,” he says.

3. Respond in an appropriate manner

Stephens says businesses must respond on the level and platform of the consumer. There’s no point replying on Twitter when the issue was on Facebook, for instance.

“On Facebook, companies must respond in a way that is a lot less corporate than it’s used to. Facebook users are used to a more peer type communication, rather than in a corporate way.”

Two notable examples of social media stuff-ups have been from Qantas and Coles.

In late 2011 while Qantas was in the middle of its industrial relations nightmare having recently been forced to ground its fleet, it launched a competition for Twitter followers to win a pair of first-class pyjamas and amenities kit. To win, Twitter followers had to tweet what their dream luxury inflight experience would be.

Rather than inspiring consumer excitement, it prompted a barrage of negative tweets about the airlines services with the #Qantas luxury.

Stephens says around the same time Coles invited social media users to complete the sentence: “In my house it’s a crime not to buy…”

“On Twitter, the comments were entirely different. Responses ranged from “milk from real Aussie farmers”, to “social media 101 handbooks”. The actual way Twitter is structured inspires cynical responses and people who manage social media accounts need to know and understand the network.

“You need people who know the internet, not necessarily the people who have grown up with the network, but you need someone savvy,” he says.

Stephens says it’s impossible to always predict how a post will be received, but companies need someone who has a reasonable idea.

“You can’t always predict how a post will go and if you worried too much you’d end up never using it in the first place, but you need to have an idea to be able to respond,” he says.

Stephens says businesses need faster processes which allow media managers to respond to a potential crisis in a speedy fashion.

“A lot of it is about building an element of trust in the people who are managing the social media. Companies also need to have in place the appropriate processes, if these lines are clearly defined for the managers it’s a lot easier.

“We often see the people who are managing a company’s social media not know where the lines are,” he says.

Stephens says the response of Oreo to the recent Super Bowl blackout is a good demonstration of a company with quick processes in place.