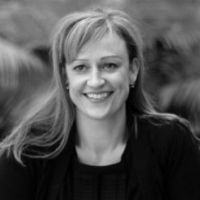 Google’s Sydney office features elements you probably never thought a workspace needed – sleep pods, vertical gardens and fish tanks are all included.  It was all part of the brief for Angela Ferguson who took on the major project when Google opened its headquarters locally in 2009.

The designer, writer and speaker designs workspaces to match the culture of an organisation. For Google, much of that culture is around collaboration, transparency and innovation, so an open environment – including its famous space for offering free meals to employees – was an essential part of the brief.

As the managing director of interior design and architectural studio,Futurespace, Ferguson leads a team responsible for the designs of some of our largest corporate spaces, including Microsoft, Fortescue Metals, GlaxoSmithKline, SBS Television and Fox Sports.

She says the real satisfaction comes to her when she’s able to “give back floors” – that is, create new interior fitouts that truly maximize space. The company, founded in 2001, derives its name from supporting the “future of the workspace” and focuses its design principles accordingly. It specialises in producing six-star green offices and creating fitouts that support the wellbeing of people.

A qualified interior designer, Ferguson joined Futurespace in 2009 after merging her six-year-old Ferguson Design Studio (where she nabbed big clients like Google and Qantas), becoming one of two shareholders in the business. She recalls wanting to be a designer ever since working in a data entry job with a publisher in Melbourne and realising she didn’t want to work in a “horrendous soul destroying office with ‘government green’ painted walls”. She researched courses she could study and completed an Interior Design degree at RMIT. She now regularly writes about, and is called on to speak about, the future of workplace design and just how an innovative approach to where we work can change the way we work.

Having now run businesses for ten years, Ferguson says she’s been forced to gradually let go of her need to continually be designing, which has been challenging. Meanwhile, a lull in major work during the global financial crisis didn’t help her desire to promote groundbreaking workplace design.

In September 2014 she experienced a turning point that reconnected her to the career she loves. “I went on a trip to Denmark and Switzerland for a design tour with nine people from Sydney and Melbourne. I had an incredible time. It reminded me why I’m a designer and I came back completely inspired and motivated to be authentic and do what I love to do.”

It was a trip she says with it’s own personal hashtag, ‘mums on tour’, recognising the fact she was a with a group of people who were taking a break from their regular family and working lives to connect with their passion for design. “I’m still looking at the photos. It was one of those dream trips you never forget.”

Ferguson says large organisations are finally starting to again see the value in great workplace design and how it can affect productivity and the bottom line. Her team’s working on a range of major projects and hoping to play a part in the happiness and satisfaction we can derive from our where we work in the future.

Leadership qualification. Mostly life experience and the ability to learn from mistakes or when things don’t go ‘my’ way.

High school career ambition. I wanted to work in advertising as a graphic designer and live in the city.

First job. Checkout chick at the first supermarket in Australia to have scanners rather than manual registers.

Who and what do you lead? I have a team of around 20 interior architects in Sydney and Melbourne who are the heart and soul of our business – futurespace.

How do you stay informed? Instagram (I am addicted) and social media, Harvard Business Review, Fast Company, The Economist online subscriptions. SMH, The Financial Review and the Melbourne Age. Design, Interiors and Architecture blogs, other blogs designed for women in business.  In print, I read Indesign, Vogue Living and Belle Magazine.  On TV, I watch ABC news, Australian Story, The Gruen Transfer and other topical series the ABC produces.

How do you manage your wellbeing? Through meditation and exercise, although I don’t do either often enough. I also have a good, healthy diet that is sugar and caffeine free, and I have an incredible group of people around me who form a support/mentoring network both personally and professionally.

First thing you do in the morning? Check instagram! I then take my vitamins, give my family cuddles then do a half hour walk. I don’t have time for a longer exercise session in the mornings.

An average day in the life.. Is hectic! I am usually up around 5.30-6am to organise the household and then myself. My husband and I share school drop offs, then when I get to the studio (either in Melbourne or Sydney) most of my time is spent in meetings with staff, clients, potential clients, and other people in my network.  I don’t often get much time to get my own projects done, so I try and spend a day at home each week doing focused, concentrative work that requires long periods of not being interrupted.  At least twice a week I will have a work related function between 6-9pm, so my week days are very long and intense, and I try to completely switch off at weekends.

Leadership ‘superpower’?  Respect: for myself and for my own experience as a designer and a businesswoman, whilst also being able to be honest about what I might not know. Respect also for my team, and for their skills and talents and humanity. The best thing about my job is supporting every individual staff member to play to their strengths.

Career advice to your 18-year-old self. Keep having as much fun and making as many mistakes as you are right now – it will all become an invaluable part of your life experience and who you are as a person.  Yes, you are good enough and no, you aren’t fat. Most of all, stop giving yourself such a hard time RIGHT NOW!

Angela Ferguson’s story is the latest in our 100 Stories Project, in which we’re asking women about a turning point that’s shifted her leadership career. Telling 100 stories from January 1 2015, the project showcases the diverse range of leadership careers available, as well as some of the brilliant achievements and fascinating career paths of women. It also demonstrates how planned and unexpected forks in the road can take you places you never thought possible.