Meet Yash Semlani, the eight-year-old travelling the world in the name of entrepreneurship 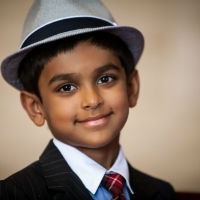 Yash Semlani is proof it is never too early to become an entrepreneur.

At the tender age of six, the school kid from Houston, Texas asked his parents for a video console. But instead of just purchasing the console for him, Semlani’s parents suggested he try his hand at raising money through an old-fashioned lemonade stand to “learn the value of money”.

Together with his friend Vaansh, Semlani raised $580 from his first lemonade stand. The duo split the proceeds, Semlani donated $40 to a children’s charity and thought he would keep the remaining $200 for his video console.

But speaking to SmartCompany this week, the now eight-year-old Semlani says he never ended up buying the console, after realising “how hard I had to work to earn that money”.

The following year Semlani ran another lemonade stand, this time with a US-wide program called Lemonade Day, which was founded by Michael Holthouse, a member of the Young President’s Organisation (YPO). Raising money for the Texas Children’s Hospital, Semlani and his brother donated $6200 in profits from their lemonade stand to the hospital’s Help Kids Be Kids program with the help of a matching donor. As the face of the hospital’s campaign, he successfully raised another $59,000.

The experience prompted Semlani to establish his own not-for-profit organisation, Make A Difference Entrepreneurs (MADE), and he now travels around the USA to encourage other kids to start their own businesses and adults to support them. He is even in the process of filming a television series.

MADE is also what brings Semlani to Melbourne this week for YPO’s Global EDGE conference, along with more than 2000 chief executives and big names like Sir Bob Geldof, Olivia Newton-John and Malala Yousafzai.

Semlani admits he was “a little nervous” starting his first lemonade stand but his dad helped him out.

“My dad is an entrepreneur so I did hear some of his conversations and was very fascinated by how he would think of out-of-the-box ideas to grow his business,” Semlani says.

But he says his ideas of what makes an entrepreneur soon changed.

“I realised it’s a lot of hard work and an entrepreneur always needs to innovate and apply things learnt from other experiences to your business to move it forward,” he says.

“I also realised that without a mentor it’s hard for kids to set up a lemonade stand and understand some of the terminology in the workbook. Some of my friends who signed up did not actually do the stand making me very sad.”

Semlani says some people have told him he is too young to pursue his dreams, but he says age doesn’t matter.

“I just smiled at them and went about doing what I believed in and the results are very visible,” he says.

He knows that there will be “ups and downs” in his career, but he says his dad has taught him “the highs and lows are like sunrise and sunset, after a dark night knowing that the sun will rise helps you face the difficult times”.

Semlani has bold goals for MADE but he says the organisation needs more mentors to help the “millions of kids in the world that need to experience entrepreneurship and making a difference”.

“My brother and I are only eight and five and the challenge we have taken on with MADE is not easy,” he says.

“But [it is] one that cannot be postponed and one that we intend to win. There are millions of kids out there that are not as fortunate as you or your family.”