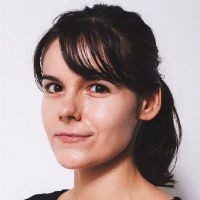 Ena Hadziselimovic’s parents weren’t too sure when their daughter, a university student at the time, decided to launch an e-commerce business with her classmate on their “meagre” personal savings in 2012.

“We had our parents saying, ‘are you sure you want to do that? Maybe you should try a basic job first?’” the 25-year-old tells SmartCompany.

“Parents want you to have more security, of course. But it never got into our heads once, the thought that we could fail.”

So at just 23 and 25, Hadziselimovic and her business partner – who chooses to remain anonymous – launched women’s online fast fashion retailer Hello Molly out of their cramped living room.

“When that first order came in, we thought, we can make millions of more people happy. We were young and stupid,” she says.

“But we were in a position where we had nothing to lose, whatever we made we put back in to the business, we didn’t take a salary. We didn’t have families or mortgages.”

Their naivety paid off, with orders quickly rolling in for Hello Molly’s wide variety of low-price, flashy and colourful ‘party’ dresses.

“When we started we didn’t have a lot of money, so we had to be very smart about which styles we chose. We didn’t want to compete with the Cotton Ons of the world with everyday basics. We chose things that stood out,” says Hadziselimovic.

It was a decision that captured the attention of their young female customers, who were looking for something different to splash their cash on.

With April now set to be Hello Molly’s first million-dollar turnover month, Hadziselimovic sits down with SmartCompany to tell us why ‘social’ is a way of life and not a marketing trend and shares the moment her success really sunk in.

An early riser, Hadziselimovic is up by 6am to hit the gym for a workout before starting her day.

The Californian-native will opt for a classic Aussie breakfast of Weetbix, before she’s at Hello Molly’s Surry Hills warehouse and office by 8.30am.

After checking in with her team of six warehouse staff, which is in addition to an office team of around six, Hadziselimovic begins checking her overnight emails, choosing to respond to everyone personally.

Hadziselimovic, who is managing director of the fashion e-tailer, will then take a good look at the previous day’s sales numbers. With Hello Molly getting in around 100 new pieces of stock a week, all of which are styled and photographed weekly, Hadziselimovic says she likes to stay completely across which styles are hitting the shopping baskets and which aren’t.

Her daily tasks will then consist of a range of management duties, but she says she’s not above helping the customer service team with a tricky order or assisting the warehouse staff with the picking and packing in busy periods.

“That’s important to me to be at the same level – we don’t have separate offices, we all sit in next to each other. I don’t want the team to feel like I’m looking down on them. I always value their opinions in terms of drafting our policies. I always take into account what they’re hearing from customers,” she says.

But Hadziselimovic says she has taken a huge step back from her original hands-on role in the company to focus on its strategic direction, and admits sometimes these days she will find herself twiddling her thumbs.

“The company has gotten to a point where it can just function on its own. At the start it was a 24/7 gig, when it was just the two of us sweating in the living room, constantly refreshing the order page,” she says.

“It really has now just given me an opportunity to sit back and see how far we’ve come and look at the future.”

Asked about the importance the business’ social interaction with customers – who happily post photos of themselves head-to-toe in Hello Molly outfits – unlike most managing directors, Hadziselimovic doesn’t wax lyrical about the company’s social marketing strategy.

“It’s funny, when we talk to other businesses about how we started, especially older and more established retailers, they always say, ‘social media is so funky and trendy and we need to market that way’,” she says.

“We didn’t think like that, that’s just our generation – we’re all on social media. So of course we would market ourselves on there, how could we not?”

Hadziselimovic says as Hello Molly has grown, she and her business partner have been able to have a more balanced social and work life.

When she’s not in the office, she loves to spend time with her fiancé and makes sure to attend a weekly trivia night with her business partner – with whom she still values a strong friendship.

Hadziselimovic says their ability to recognise each other’s strengths and weakness has been key to forging a successful personal and professional relationship.

“We’re both good at different things and we don’t step on each other toes. It’s a partnership – we didn’t go into this thinking, ‘I want to make so much money for myself’. We love sharing our success,” she says.

On the weekends, you might find the young women out at a bar or a club, representing in their Hello Molly outfits.

“I love when girls come up and ask me where my clothes are from, or when I see someone wearing Hello Molly,” she says.

“I honestly live for that. That very first order years ago kicked us into overdrive and now every time a girl says she’s happy with the shipping or we get a good review or I see someone wearing our clothes, that’s what keeps driving me.”

The latter half of 2015 will see Hello Molly continue to invest in its SEO, introduce a minor redesign on the site (after a full redesign last year), focus on its mobile platform and push its overseas strategy.

Hadziselimovic says in coming years she can see the brand getting into lifestyle products, saying she would eventually like to scale Hello Molly to the levels of US fashion giant Urban Outfitters.

“I just want it to get as big as it can possible get,” says Hadziselimovic, who insists she has no plans of exiting the business.

“I’m in it for life and I’m sure my partner is too. I’m already envisioning my kids getting in the warehouse when they’re 16,” she laughs.

And as far as they’ve come in two-and-a-half years, Hadziselimovic says the pair’s success sinks in when she least expects it.

“Some days I’m just too busy to think about it, I’m thinking, we can totally be better,” she says.

“But other days, like recently when I was walking up to the roller doors of our warehouse and we’d just had them painted with the Hello Molly logo, I’m walking up to that in the morning and I just realise how big it is and think, I’m in the middle of Surry Hills, there’s my sign, and I’m like, ‘wow’.”