One public servant from the Northern Territory has racked up almost $400,000 worth of annual leave and there’s well over 2000 others with more than three months, according to an assessment by auditor-general Julie Crisp.

Of course the person is entitled to their 4,775 hours of paid vacation time — which equals about 650 days, or 130 weeks if you prefer — but according to human resources gospel, they would have been a more productive, engaged employee over the years had they taken breaks more regularly and come back to work refreshed.

“To put this particular employee’s entitlement into context and taking into account annual public holidays and ongoing 30-day annual leave credit per annum, if this employee commenced leave on 1 April 2017, their annual leave and long service leave entitlements could enable them to be on fully paid leave until mid-February 2021,” Crisp writes in her second report for this year.

The auditor-general looked at annual and long service leave entitlements at the end of February. At the time, she found 2378 NT public servants with more than 12 weeks of annual leave across 34 agencies.

Her report suggests most NT public servants have somewhere between zero and six weeks of annual leave accrued, but on the other hand, there are also more than 1500 with between 12 and 18 weeks, worth over $46 million. 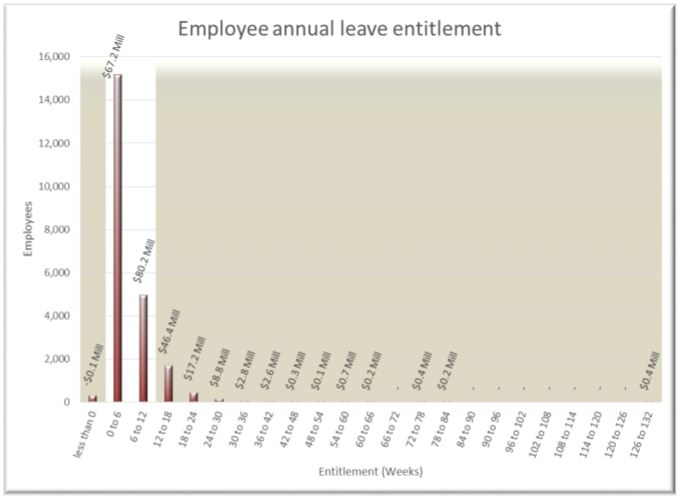 “My review of the data related to leave highlights the necessity for entities to manage staff leave on a continual basis and ensure that staff take their leave entitlement in a timely manner,” Crisp says in her latest report.

She cautions NT public service leaders that her assessment was not a proper audit and “does not mean that there are not other matters of which management should be aware in meeting their responsibilities, nor does this report absolve them from taking appropriate action to meet their responsibilities.”

The auditor-general also found a small discrepancy between the total number of employees listed on an annual leave report and a long service leave report, which she asked agencies to address so that both are accurate when they are produced.

Police, Fire and Emergency services has the most banked up annual leave, followed closely by Top End Health Services. The Central Australia Health Service and the NT Attorney-General’s department are also major outliers with the third and fourth-most.

Agency heads can force employees to take recreational leave when it gets to an excessive amount, Crisp points out, and she lists some of the reasons why they should encourage staff to have regular time off:

• Cash flows may be affected if employees were to leave the entity unexpectedly;

• Not taking leave is detrimental to employees’ performance and wellbeing resulting in work, health and safety risks;

• There is the potential that leave may have been taken by an employee but the leave application forms were not submitted and/or approved correctly;

• There is a financial risk associated with many staff taking their full leave entitlements at the same time; and

• There is an increased risk that fraud may occur and not be detected.

Crisp reports the data among a huge range of other findings in a massive tome that “outlines the results of 40 separate audits and other tasks conducted during the period 1 January 2017 to 30 June 2017” all at once. The NT audit office typically provides these combined reports to Parliament only two or three times a year.

Whilst this article refers specifically to the NT public service, much the same can be said for the private sector. The problem for them is that the Fairwork Commission won’t allow an employer to request an employee takes leave unless they have MORE than 8 weeks accrued.

This is completely unfair to a small business, its workforce planning and its cash flow.

Is it any wonder that small businesses are reticent to employ full time staff. Will ANYONE stick up for these businesses?