Pitch perfect: The three things that made this Shark Tank pitch floor the judges 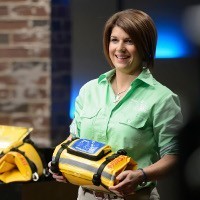 Tracey Beikoff, founder and chief executive of first aid kit the Original Rescue Swag, strode into her Shark Tank pitch with the supreme confidence of knowing her business inside out.

“I was so well prepared, I knew I’d just go in there and nail it,” Beikoff told SmartCompany yesterday, the day after her episode aired on Channel Ten.

“By the time I walked down that corridor, I knew it was mine to get.”

And she got it – the Queenslander was offered a $220,000 investment deal from Shark Tank judge and technology entrepreneur Steve Baxter.

Dressed like she’d waltzed in from the farm in tan jeans and a button-up shirt, Beikoff put on a show for the judges alongside her mother and sister, which included enactments of falling off a horse and getting bitten by a snake.

Baxter says the pitch won him over and made him consider opening his wallet.

“There’s a lot you didn’t see, we really dig into numbers,” Baxter says.

“Reading back my notes – and I had a very full two pages of notes – all the numbers just worked, and it’s not often you see that.”

Having come up with the idea after a minor horse riding accident that made her recognise a need for a more mobile first aid kit, Beikoff first launched the Original Rescue Swag as a way to raise funds for her local RSPCA. But when she received a broader demand for the swags, the entrepreneur realised there was a bigger market out there.

“We started to realise that if you have a family, a mate or a loved one, hiking or adventuring out there, all of those people are our customers,” she says.

Beikoff, who describes the whole Shark Tank experience as “absolute exhilaration”, will now use Baxter’s money to commence large-scale manufacturing of the Original Rescue Swag, protect international rights to its intellectual property and roll out the products to global markets, including the US, Canada and Europe.

“This funding injection is a way to fast tracking of everything,” she says.

And Baxter believes the response since the show aired on Sunday has proven his investment was the right one, including the fact the Original Rescue Swag website managed to host the huge demand of traffic it received from interested viewers.

“Tracey’s website was the only one that stayed up after the show premiered, the rest have fallen over… Rescue Swag was the only successful Shark Tank winning pitch that held up after it was flooded by 700,000 viewers,” he says.

Baxter now says he’s “opening up the Rolodex and playing phone a friend” to walk Beikoff into her into key markets.

So what’s the key to blowing away the Shark Tank judges? And how can you make your pitch perfect? SmartCompany looks at three reasons why Beikoff’s pitch was on the money.

1. A pitch is a performance

Beikoff says she practised the pitch so many times with her family as though they were preparing for a play.

“We had this country vibe, so we used that to our advantage,” she laughs.

Like any performance, Beikoff says preparation and practice was the key, telling SmartCompany the whole family played their part.

“It was all timed to military precision,” she says.

“In the green room, I was practising with my mum and sister and we had it down pat. When you’re doing a performance, it is more about doing it as per the script. When the open questions started later, that’s when I had to fly by the seat of my pants.”

But Beikoff says preparation was the key to overcoming question time too.

“I knew every aspect of the product, where I would like to take it, what would be required to take it there. You need to be able to know where you’ve come from, but also be able to see the future,” she says.

Baxter agrees preparation was the key to Beikoff’s successful pitch, which he said lasted for little over an hour.

“She certainly got quite a grilling from all of us,” he says.

With all the preparation under her belt, Beikoff says she knew it was important to go into the pitch knowing she could get the money she was looking for.

“I absolutely believe your mindset is the crucial factor to your success. You have to maintain a positive sense and knowledge that you will succeed,” she says.

Baxter agrees: “One thing Tracey definitely did not have was nerves.”

Baxter says his most dreaded part of any pitch is seeing a complex flowchart or diagram pop up on a PowerPoint slide.

“No confusing flowcharts, I don’t want anything more than a couple boxes and arrows,” he laughs.

Baxter believes around seven or eight slides is the perfect amount for a presentation and each slide should be relevant and concise. He says Beikoff delivered that with an entertaining hook.

“I like people to talk about the problem, talk about their solution, then very quickly move into team and how they’ll gain traction,” he says.