Why we should all care about office design and productivity

The modern workplace is seldom depicted as a congenial way to spend the majority of your waking existence, and it’s little wonder — the average office layout is not optimised for happier staff (and consequently improved productivity).

In virtually every decade since the modern workplace burst into existence, some film, poem, painting or television program has conjured up the essence of what being in an office is like, and the reality (more often than not) is … soul-destroying.

Shining a light on productivity 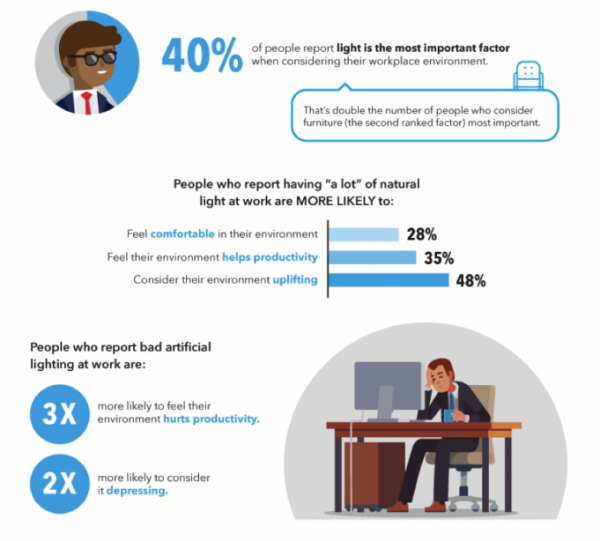 A recent survey of 1000 Americans discovered (surprise!) that workers exposed to natural light are more likely to be comfortable in their workplaces, as they feel it helps their productivity.  Or rather, it helps their sense of wellbeing, which assists productivity.

Natural light improves quality of sleep. Those subjected to artificial or insufficient light sleep poorly, and sleep-deprived employees cost the US economy $US411 billion ($531 billion) per year. Not surprisingly, improved access to natural light is high on employees’ wishlists (not to mention fresh air, more greenery, and perhaps a good coffee machine).  Sunlight also spurs greater need for exercise, which stimulates endorphins, which improve mood!

Unhappy workers are expensive (costing an estimated loss of $US550 billion annually in the US). What’s even sillier is that employers and company owners have taken years to realise they only have their own false economic thinking to blame. Employer groups remain comparatively quiet about links between worker morale and office layout, but love to weigh in about reducing penalty rates and the joys of the gig economy.

The British Council of Offices found that productivity increased by 23% when bad office furniture was replaced. Imagine — just changing old chairs for new ones could cause a turnaround in a business!

Offices that invest in better seating and desk arrangements could also save on potential workers’ compensation claims. According to the Journal of the American Medical Association, poorly designed furniture is racking up an annual tab of $US81 billion, owing to pain and discomfort caused by non-ergonomic computer setups.

Many companies spend big when it comes to funky meeting rooms, but scrimp on the rest of the office. The open plan office is in some ways like the panopticon prison where surveillance of the inmates is constant, which provides great comedy fodder for Ricky Gervais and our own Working Dog (creators of Utopia). Shared space is not many employees’ cup of tea, with around 70% preferring private spaces in which to concentrate or at least an opportunity to relax a little.

People who speak of their office having “personality” are generally talking about art and office colour schemes, according to the same survey above. Blue, green and white are supposedly favoured, but red less so. Some companies mistake art for rather sterile statement pieces that loom large in the reception area — certainly global law firms do this, and it could cause clients to wonder where their money is really spent.  But again, employers and business owners could think about more creative ways to keep their staff happy.  Some humour, colour and personal touches never go astray.

Some companies turn old vehicles into office desks, or create slides from one floor to another, or build funky games rooms … and the staff who work there always seem proud to show others around their innovative spaces.

If you’re a boss or company owner, it’s worth considering spending on plants, improved lighting and loosening up the office vibe a little.  The bottom line will soon speak for itself, when your staff are feeling happier, less stressed — and valued. 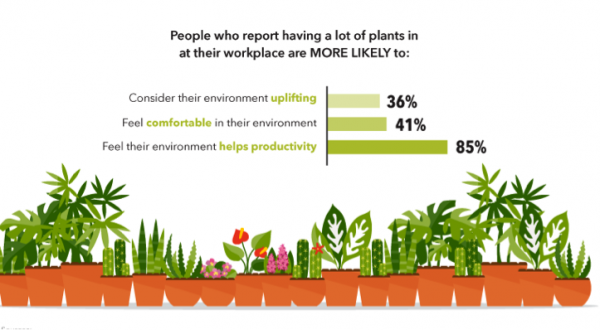 Thank you to https://www.digitalthirdcoast.com and https://www.potsplantersandmore.com for access to graphics and the study results.