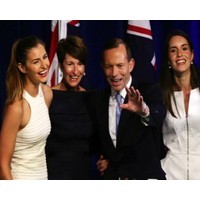 When Tony Abbott secured the Liberal leadership in late 2009 he had nothing to work with.

He’d won the leadership by a single vote, his party was hopelessly divided over the issue of climate change, he was facing a popular prime minister who’d seen off John Howard, Brendan Nelson and then Malcolm Turnbull. All he had was the smarts from being in politics since the early 1990s, first as a media adviser and then as an MP, and his aggression.

With all the focus on Labor’s problems since 2010, it’s overlooked that it took Abbott to place his opponents under pressure, pressure that exposed their flaws. If it weren’t for Abbott, Kevin Rudd would have led Labor to the 2010 election. If it weren’t for Abbott, Julia Gillard would have led to Labor to this election. He has destroyed two Labor leaders and, given the history of first-term opposition leaders in Australia, looks set to add to those scalps before he’s finished. Abbott has been at Labor from the moment he took over, always attacking, always looking for an angle to hammer his opposition on, never giving them a moment’s peace.

Labor never devised an answer to it.

It’s also overlooked that, for all of the rhetoric of the last four years, Abbott will go into government committed to much of Labor’s agenda?—?the same fiscal policy, the same policies on education and disability, similar policies on broadband and asylum seekers and industrial relations. Only on paid parental leave and climate change do significant differences remain?—?both of them “signature” Abbott issues.

And, similarly, much of Abbott’s success has come from his capacity to neutralise the electorate’s deep feelings of scepticism toward him. He entered the leadership with significant reputational problems on women, social issues and religion; one sneering commentator?—? i.e. me?—?declared he would destroy the Liberal Party with his conservatism. Instead, Abbott set out to neutralise those problems, most particularly with a spectacularly expensive paid parental leave scheme and repeated assurances he would do nothing on reproductive rights (although, on abortion pill RU486, watch out for who ends up appointed to the Pharmaceutical Benefits advisory committee).

In short, Abbott put aside whatever personal issues were likely to prevent him from offering a moderate image to the public, and the public has rewarded that effort?—?in many ways like it eventually rewarded a more pragmatic John Howard in 1996. Abbott learnt at the feet of one of Australia’s most successful politicians.

Abbott has also had the benefit of unity and discipline from his colleagues. Since the moment he secured the leadership, his colleagues have been firmly locked in behind him, and they remained focused on maximising their chances of defeating Labor. The contrast with Labor has been complete, and damning. Whatever else the Coalition might have been since late 2009, it has never been self-obsessed, while Labor has frequently looked like its only interest was resolving its leadership tensions.

And finally, the Liberals ran an excellent, well-integrated campaign. Sure, there were a lot of hiccups?—?more than in 2010, oddly, and worse ones, too, like that ludicrous internet filter stuff-up?—?but none of them were serious enough to give Kevin Rudd any momentum. Abbott worked effectively with his party HQ and offered a coherent message focused on some key cut-through messages?—?no repetition of the chaos of minority government, and appeals to the entitlement mentality of the electorate. Abbott, a former journalist, and his campaign machine know in their bones how to effectively deliver a message and how to shape the debate, something Abbott has been doing since the moment he became leader.

If Labor wants a playbook of how to get back into government even when everything looks to be against you, well, Tony Abbott has just finished writing it. But the problem is whether they have Abbott’s skills to follow it.