Are you always tired and stressed? It may be adrenal fatigue 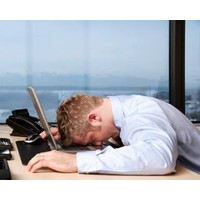 We’ve all felt beyond exhausted at some point, and it’s particularly common when things at work are more stressful than usual. But if you’re consistently struggling to fall asleep at night – despite ongoing feelings of exhaustion – and you’re not coping with stress like you used to, it could be more than just tiredness.

Most of us know when we’re overly stressed and operating at our limit. And although we can exist like this for a while, if we don’t slow down at some point, our body stops coping with the daily stresses that life presents.

Edge Wellness naturopath and nutritionist Tania Flack describes adrenal fatigue as a state when chronic stress causes the adrenal glands – which are responsible for the secretion of adrenaline, cortisol, DHEA and other hormones which help our body to perform under stress – to become exhausted and stop functioning, leaving the immune system weak and putting our overall health at risk.

Signs of adrenal fatigue include an ongoing feeling of exhaustion, a decreased ability to cope with stress, poor stamina and exercise intolerance, difficulty getting out of bed, light-headedness, mental fogginess and difficulty concentrating, weight gain around the abdomen, depression and low mood.

“Adrenal fatigue is quite common and it comes in three stages. The first stage of adrenal fatigue is where we have a persistent amount of stress over a long period of time and our cortisol levels get quite high,” she says. “The person feels anxious and frazzled, but they’re still coping with their workload.”

The second stage, according to Flack, is when the adrenals fail to cope with chronic stress. While many people can still carry out their everyday activities at this stage, they start to struggle with fatigue and the body is slower to bounce back. Sleep difficulties arise, our metabolism slows and we gain weight around our mid-section. In the third stage, cortisol output starts to decline and the body enters the survival stage where it conserves energy in order to survive. At this point, exercise is difficult and depression is common.

“[Sufferers] are tired but wired, no matter what they do. They’re not restoring themselves and even after a holiday, they’re still fatigued. It brings cognitive difficulty and brain fogginess. It’s a vicious cycle,” says Flack.

How to nourish and restore your body

Treating adrenal fatigue not only requires a nutritional overhaul but a lifestyle overhaul as well – and that means slowing down.

“The best way to avoid adrenal fatigue is really just to slow down,” says naturopath, nutritionist, herbalist and founder of Elevate Vitality, Cassie Mendoza-Jones. “Do exercise, do yoga, go to bed at a normal time every night, wake up at the same time every morning. It’s just slowing down.”

Yoga teacher Sally Belmont agrees and notes the importance of understanding that we can control our nervous system with breath.

“I teach full yogic breath, which is right down into the abs, massaging the diaphragm and all the organs below,” she explains. “It’s really important to slow down and be in the moment. That’s what I teach with restorative yoga – that deep relaxation into meditation. It puts you into a state of calmness and with that you instantly start to connect with your parasympathetic nervous system.”

Similarly, Flack says people with adrenal fatigue need to examine their output and learn to balance it with their input.

“It’s really about getting the balance,” she says, emphasising the importance of stress management and learning the techniques earlier, rather than later, in our careers. “People with adrenal fatigue also need a really deep, nourishing diet. Not a normal diet because you’re operating at a very high level. You need to understand what your needs are around food.”

According to Mendoza-Jones, using a combination of licorice and Rehmannia – a herbal combination which has been used for thousands of years – is an effective way to heal and nourish the adrenals.

“Licorice and Rehmannia help to make cortisol and help cortisol to function properly. Both of them are anti-inflammatory,” she explains. “With adrenal fatigue, you can become quite inflamed in your body. Rehmannia is really anti-inflammatory and beautiful for the immune system, and licorice helps with sugar cravings.”

And while they might be the first things people reach for, it’s best to avoid stimulants.

“Unfortunately what you really crave when you have adrenal fatigue is stimulants, like caffeine, sugar and alcohol, but avoid them,” says Flack.