Pandora: Chivalry is a feminist issue 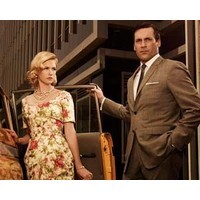 It’s late in the arvo, and we have just been engaged in a “fierce conversation” on the subject (they must be feeling guilty).

Why, they say, should I offer you my seat when you want to be equal?

What I want is this. Until society has changed its attitude to women and given them the same opportunities, pay, work responsibilities and respect as men, stand up for me on public transport. In fact, you can stand up for me when I enter the room, hold my chair for me to sit down, open the door for me to glide past, take my jacket. You can even bow to me and back out when you’re leaving. That’d be good.

It’s not because I am the weaker sex, which was once the purported reason for such chivalry.

The reason for making the effort to be chivalrous is a simple one: it’s about awareness. Every time a man rides home, weak-kneed and back aching, he can spare a thought for the lot of women everywhere, doing too much housework, being overlooked for promotion, getting paid less than he, suffering from paltry superannuation bank balances because of the time spent out the workforce.

Why would men ever overturn the sexist attitudes of society if all that has changed in the feminist fight for equality is that they no longer have to stand on the train? They are still rich and powerful, and now they are comfortable too!!

But can my colleagues understand this undeniable logic? The answer is yes, of course, but they are being wilfully wicked and refused to concede its sense.

They are clamouring for segregated trains and trams so they don’t have to stand up for me, they are asking whether a rich woman should stand up for a poor man.

One merciful colleague has supplied me with at least one published tract to bolster my ranks: Caitlin Moran. Moran has dedicated an entire chapter to chivalry … although it is only three pages long!

I am not entirely certain about the value of support from a woman whose cover sleeve claim-to-fame is having put a wasp in a jar and getting it stoned as an experiment. However, it seems I cannot afford to pick and choose from among my supporters, currently standing at one.

The recent historical TV drama series, Downton Abbey, Moran says, has revived the idea of chivalry and opened up the idea to debate again. (Until the series, many modern young blokes had probably never heard that such an idea once existed!)

Moran puts forward her argument “primarily on the basis that I like sitting down”. I agree. Moran argues that women really might need a seat, subject as we are to various hormonal onslaughts from periods to pregnancy to menopause.

But this is not my point. Mine is that standing is uncomfortable, and might help to remind your everyday bloke of any age that a life resplendent with random discrimination on the basis of gender is also an uncomfortable one.