Battle of the bulge: The jobs most likely to make you fat 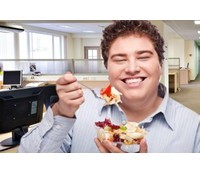 If you’re putting on weight, is your job to blame?

Close to one in two workers say they’ve gained weight in their current job, according to a survey by CareerBuilder, an American-based human capital consultancy.

The firm, which operates globally, surveyed 3600 full-time American workers. Only 16% said they’d lost weight in their current role, with those in professions involving high stress and long hours the most likely to report piling on the kilos.

“Weight gain at work often comes from a combination of poor eating habits when you’re on the go and not being able to fit a workout into a busy schedule. Two in five workers don’t exercise on a regular basis and one in ten doesn’t exercise at all,” said the HR vice president at CareerBuilder, Rosemary Haefner, in a statement. “Whether it’s daily walks with a co-worker or taking advantage of company wellness benefits, it’s important to find a way to stay active.”

CareerBuilder also asked those surveyed why they thought they gained weight.

Most of them reported what you’d expect: 56% nominated “sitting at my desk most of the day”. Another 26% reported eating out regularly, while 4% nominated happy hours at local pubs being to blame.

When a workplace provided workout facilities or gym passes, 36% said they took advantage of them. Only 3 in 10 workplaces did this however.

One job perhaps missing from the list of roles most likely to see you gain weight is that of McDonald’s CEO. Global Macca’s chief Don Thompson told analysts on Wednesday that he’d managed to lose 9 kilos in the past year, despite continuing to eat McDonald’s “every day”.

It seems like working in the executive ranks at McDonald’s is likely to come with expectations that you’ll eat the food. Local chief Catriona Nobel told The Power Index last year that she eats McDonald’s fries “once a week”.

“I used to eat fries every day when I was a manager and 20 and very active. But now that I sit at a desk a lot, I only let myself have fries once a week and I would only very occasionally have a double choc fudge McFlurry,”she said.

The jobs most likely to see you gain weight: