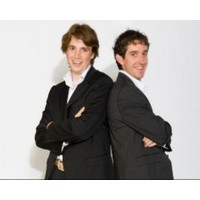 The annual celebration of Australian wealth that is the BRW Rich 200 hits the streets today for its 30th year.

SmartCompany’s annual Smart50 awards, which tracks our most successful entrepreneurs and small business owners, are far newer – they began in 2007. Already though, we can see our Smart50 winners rising through the ranks of the BRW Rich 200.

This year, Smart50 winners and Atlassian founders Mike Cannon-Brookes and Scott Farquhar broke through the $235 million wealth threshold to join the 200 richest Australians. They have $250 million apiece.

They joined other Smart50 winners like Catch of the Day founders Gabby and Hezi Leibovich (who debuted on the Rich List last year). The Leibovich brothers had a joint holding of $330 million – which is well up from the $240 million to their name last year.

These four now very wealthy people made their fortune by starting and owning a business – like most of the other people on the list.

As in recent years, our most successful entrepreneurs have been the ones most able to hitch their wagon to the Chinese convoy.

But increasingly, native-born Chinese with dual Australian citizenships are the ones taking advantage of the waking giant to the north.

This is best exemplified by Hui Wing Mau, who debuted on the list this year in seventh place with $4.82 billion. He’s a Chinese property tycoon with Australian citizenship. While working in a textile factory, he began trading stocks to great success. He used the money to invest in property, displaying a shrewd understanding of when to buy and when to sell.

Another Chinese property developer to debut on the Rich List this year is Shanghai-based Ye Lipei, who’s worth $600 million.

They join Chau Chak Wing, who’s been on the Rich List for a few years, and whose wealth has gone from $1 billion to $1.05 billion this year.

Meanwhile, Australia’s mining titans, who made their wealth selling to the Chinese, have had a horrible year.

Gina Rinehart lost a staggering $7 billion. Not that she’s lost her place as Australia’s richest person. The wealth she lost in the past 12 months, after all, is greater than the entire fortune of the next person on the list, Frank Lowy (who has $6.8 billion).

Other miners haven’t been so lucky, dropping places as well as wealth over the past year. Fortescue founder Andrew ‘Twiggy’ Forrest has gone from $5.89 billion to $3.66 billion (pushing him from fourth to ninth place), and Clive Palmer is down $2.2 billion from $3.85 billion last year.

And Nathan Tinkler? He’s off the list entirely. We’re not sure quite how much he has now, but it’s certainly less than the $235 million cut-off. It’s a long way to fall. Last year, he almost joined the billionaires with $915 million to his name.

While our miners have struggled, it’s been a good year for the gambling tycoons.

James Packer’s wealth is up a respectable $800k to $6 billion, while the Ainsworths are on $1.54 billion jointly (up from $1.09 billion last year). Family patriarch Len Ainsworth founded Aristocrat, along with recent money-spinner Ainsworth Game Technology.

As has been the case for the past 30 years, the single biggest millionaire-factory in Australia is our property market. In 1984, 45 Rich Listers had property to thank for their fortune. That figure hasn’t changed much – this year, 52 people made their fortune in property. Once you get into the middle of the list, almost every name seems to have ‘Property’ next to it.

Out of the 36 billionaires on the list, 15 made their fortune partially or entirely thanks to our property boom.

The richest people in Australia: