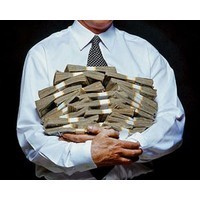 For most investors, private equity is a bridge too far. Along with hedge funds and other high-risk investments, most countries have limits on anyone but “sophisticated investors” placing their money in these ventures.

But in America, the world’s second-largest private equity fund is opening itself up to retail investors.

Carlyle Group has filed documents with the American Securities and Exchange Commission outlining its plans to set up a $300 million fund that would then put that money in funds managed by Carlyle Group. The Washington-based private equity firm isn’t allowing retail investors to invest directly in its funds, but they can put their money in a fund that will then, in turn, invest it in Carlyle Group.

How much money do you need to get in on the action? Just $50,000, provided you have $1 million in assets besides your primary residence (that limitation comes not from Carlyle, but from US regulators – net worth is the key way it determines whether you’re a “sophisticated investor” who is allowed to gamble in high-risk financial ventures). The fund is American, but plans to source up to 40% of its money from “Asia” ­– which presumably would include Australian investors.

Currently, the only way Australia’s middle-class can invest in the high-finance world of private equity is through the handful of listed private equity funds.

Carlyle’s play is intriguing for a couple of reasons. The private-equity giant already has $157 billion in assets under management, so this $300 million fund is just a drop in the ocean. Maybe the group is after the management fees, which are far higher for this fund than is typical for private equity.

Secondly, Carlyle’s middle-class bid is unique in the world, including in Australia. No Australian private equity firm has announced any intentions to chase the retail investor dollar.

Dr Katherine Woodthrope, the chief executive of the Australian Private Equity and Venture Capital Association (AVCAL), says too many investors can make signing a cheque to buy a company far more complex.

“The model in private equity and venture capital is that investors commit a certain amount, which they don’t then give you to store in a bank. It’s a commitment,” she says. “When you decide to make an investment decision and write a cheque, you then call your investors, who give you their proportion of the amount needed. If you have a dozen sophisticated investors, it’s very easy to manage the process.”

Putting in calls to 200 investors could be problematic, especially if a purchase is risky, as many private equity plays frequently are. Carlyle Group is getting around this by using a different model for its retail investors. They put their money in a fund, as opposed to making funding commitments to be called on in the future.

In Australia, ASIC regulations prevent those with less than $500,000 to invest, or a net worth of $2.5 million, from investing in high-risk ventures such as private equity and venture capital. However, to keep things simple and to allow quick decisions, most private equity players want far more than a couple of hundred thousand as a minimum investment.

“Most private equity firms, if you look at the average size, raise funds of $250 million going up to a few billion,” Woodthrope says. This means private equity generally wants people to invest millions at a time. But if you’ve got a taste for risk and a pricey investment property – along with a spare $50,000 – maybe it’s worth looking into the Carlyle Group fund.