Could you work in a busy Melbourne laneway for a day? I did 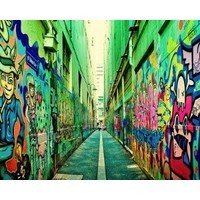 I’m writing this in the SmartCompany bunker. It’s no quieter than normal, but to me, the silence is deafening.

I’ve spent the better part of today working in a lane. Tucked into an alley next to what is perhaps Melbourne’s busiest train station, it was a loud place to type my articles.

It was also the worst day possible for me to leave the office. Our little news team was two people down. I was out the door before my editor could reconsider the little experiment we’d agreed on.

I turned up to Godfrey Lane, where Hub Melbourne had set up Australia’s first outdoor, pop-up co-working space.

The idea was simple. With laptops, Wi-Fi and batteries, what need was there to stay indoors? Hub Melbourne, which runs a more conventional co-working space just next to Godfrey Lane, thought it’d be fun to try and work outside for a day.

So they threw the event. And 120 people came, including yours truly.

The narrow laneway was a hub of conversation and activity. It was beautiful, filled with balloons, tables, plants and heaters, and free refills of steaming hot tea. And bemused passers-by walking along the redbrick lane to Southern Cross Station.

I grabbed a seat at the head of a table, and was quickly joined by six others along the other seats.

A man in a suit looked sheepish as he explained to his client what they were doing in a laneway. “I don’t normally work here, of course, but I thought this’d be fun,” he said as he led his guest to one of the more secluded tables.

Two women on my table hit it off while talking about their respective businesses. They were soon joined by another. I guess when you’re working in a laneway you’ve got a pre-made ice-breaker.

Hub Australia’s CEO, Brad Krauskopf, said one of the things he most liked about the experiment was the lack of hierarchy.

“No matter which company you’re from or what you’re working on, everyone is on the same level,” he told me. “We’re all working in the gutter, and we’re all having great fun doing it.’

In the lane, Krauskopf spent a productive morning in several meetings, including, appropriately, one about how to expand Hub Australia.

Is a permanent outdoor fixture on the cards?

Krauskopf said sure, why not. As long as they get more power boards (there was a persistent shortage of power-points during the day).

“When I got up this morning, it was raining,” he continued. “Which wasn’t great.

“But the future of work is you’ll get the ability to choose where you work. So, if I wanted to, I could choose not to work outside today.

“The other thing I liked was the learning event we did.”

Over lunch, half a dozen speakers got up to share their knowledge. One spoke on the 10 apps he used to travel the world. Another on how companies could boost their productivity through outsourcing. Yet another spoke on the history of co-working.

“The future of work is going to include constant learning,” Krauskopf said. “Anybody who dishes out a job without a good dose of learning is going to find themselves without a job to dish out. It’s very important for any company wanting to stay ahead to keep challenging their people.”

That’s all well and good. But for a wage-slave like me trying to convince their boss to let them work more flexibly, surely the sticking point is productivity.

My editor thinks I did alright.

“In terms of producing content, there was no problem at all,” Melinda Oliver says. “But I lost the ability to bounce ideas and questions off you.”

I got two news pieces done by 11am, scheduled a heap of social media updates, sent a few emails back and forth with people across Private Media, and pursued my usual, neurotic refreshing of our website to see if it’s working as it should.

I don’t think I’ve been noticeably less productive today than I normally am.

Mind you, I made mistakes I don’t normally make. In my highly distracted state, I called and left a message for Nick Xenophon by accident after reading the wrong number on a press release. I was also rather unobservant when it came to proof reading our test email – thankfully the eagle-eyes back in the office spotted what I missed.

It was hard to concentrate outside. With so many things going on around me, it took an enormous amount of willpower to keep ploughing on through my busy morning workload. I’ve no doubt the quality of my writing (and proofreading) suffered somewhat as a result.

The experience certainly made me appreciate highly controlled, indoor environments. With few distractions, it’s easier to focus on the work. The Melbourne CBD is nothing if not busy.

But as Krauskopf says, when the revolution comes, we won’t have to work outside if we don’t want to.

The great outdoors do have one thing going for them. As one of my colleagues for a day said, at least outside, you can smoke without leaving your desk.