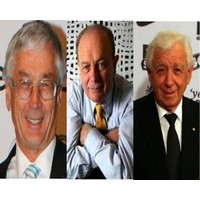 Dick Smith, Gerry Harvey and Frank Lowy have again been ranked among Australia’s most trusted people, according to the annual survey released in the July issue of Reader’s Digest.

Technology entrepreneur turned population activist Dick Smith was Australia’s seventh most trusted person, two spots lower than his rank in 2012. Gerry Harvey came in at number 56 (up from his ranking last year at number 67), while Westfield’s founder Frank Lowy also moved up a  few spots, from number 66 to number 63.

Lindsay Fox, who was the 68th most trusted Australian last year, was not ranked this year, while former publishing executive and magazine editor Ita Buttrose, fresh from her 2013 Australian of the Year win, moved up several places to number 12.

RBA governor Glenn Stevens moved up from number 69 in 2012 to number 40 this year.

The research was conducted by Catalyst Consultancy & Research, who asked 1200 Australians to rank 100 notable Australians in order of trustworthiness.

Other notable businesspeople ranked by the survey were bookie Tom Waterhouse, who debuted at number 79, and Qantas CEO Alan Joyce, who moved up from number 87 to 76 on the list.

The most trusted Australian ranked by the survey was neurosurgeon Charlie Teo, while the least trusted person was actor Matthew Newton.

“Politicians have never fared well in the trust stakes, but it seems Australians have had a gutful of our current crop,” said Sue Carney, the Reader’s Digest editor-in-chief, in a statement.

Also released was the Reader’s Digest annual Most Trusted Professions list, in which those surveyed ranked politicians as the second-to-last profession in the trust stakes, beaten out only by door-to-door salesmen as the least trusted.

CEOs came in at number 41 out of the 50 professions ranked.

The most trusted professions were, as they have been in recent years, firefighters, paramedics, rescue workers, nurses and pilots.

The 10 most trusted professions

The 10 most trusted Australians